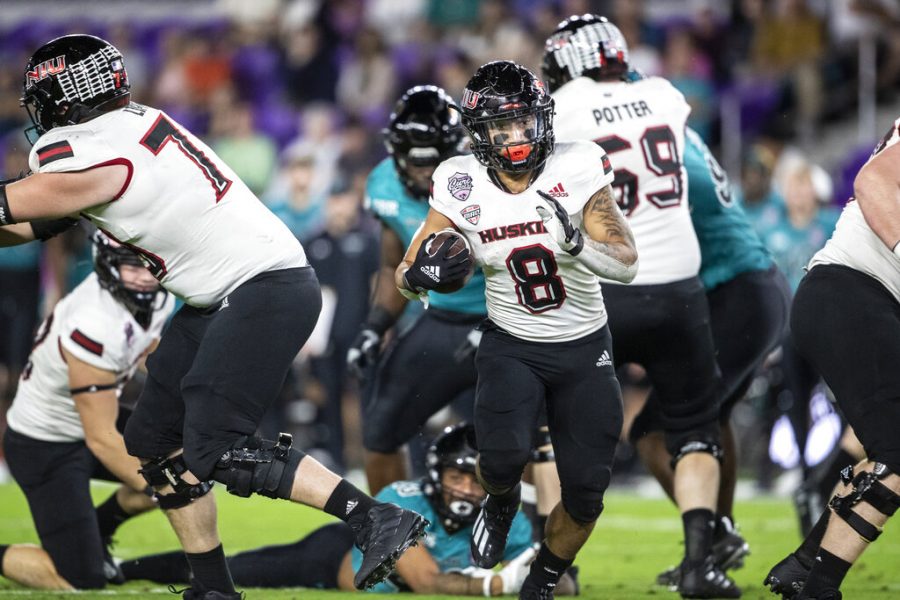 After a first down conversion inside their opponents five-yard line, two seconds remaining was not enough time for the Huskies to get off another snap in their 47-41 loss to the Coastal Carolina University Chanticleers.

Head coach Thomas Hammock said the Huskies had a play ready for the final snap, but the officials ruling on the time and if the ball went out of bounds prevented them from getting a shot to tie the game.

NIU and Coastal were in an offensive slugfest throughout, each totaling over 500 yards of total offense. In the end, the Chanticleers had the edge behind four touchdown passes from redshirt sophomore quarterback Grayson McCall.

“(The Chanticleers) have a great scheme,” Hammock said. “The quarterback is a great, excellent distributor. They got us in some unbalanced looks and then you add in the triple option. That becomes a challenge. They’ve got you outnumbered, out leveraged and they play well.”

Two of McCall’s touchdown passes were to senior tight end Isaiah Likely, who also had a game-high 96 receiving yards. Redshirt freshman running back Braydon Bennett had three total touchdowns and 108 rushing yards.
Huskies battling illness
NIU ended the game with the running edge at 335 rushing yards, but nothing came easy for many players. Hammock said after the game that flu-like symptoms forced 25 people within the program to quarantine over the past week, leaving some players’ stamina in flux.

“We thought our best chance to win was to lean on the run game,” Hammock said. “We had guys that were struggling, but when they came over to this stadium they gave us everything they had.”

Redshirt freshman running back Jay Ducker finished the game with 146 rushing yards, including a nine-yard opening rush to break the program record for rushing yards in a freshman season previously set by Allen Ross in 1977.

The Chanticleers option offense had NIU unorganized on defense throughout the first half. After an NIU field goal, Coastal redshirt sophomore wide receiver Aaron Bedgood was left uncovered on a 40-yard touchdown pass to take the lead early in the second quarter.

The Huskies offense rushed on nine straight plays on the next drive before redshirt senior running back Clint Ratkovich punched in a two-yard touchdown.

After keeping the Chanticleers to a field goal, a roughing the kicker penalty committed by Coastal against NIU senior punter Matt Ference spotted NIU a first down to extend a stalled drive. Lombardi later found redshirt junior tight end Miles Joiner for a 12-yard touchdown pass.

A field goal by Coastal before halftime made the score 24-19 at the break.
Back-and-forth continues
The two teams continued to trade touchdowns in the third quarter. McCall connected with Likely for a 27-yard touchdown pass to take the lead early in the third. Lombardi gave the Huskies the lead back with a one-yard rushing touchdown.

It took only two plays for Bennett to score a 60-yard touchdown for Coastal. By contrast, the Huskies burned six minutes of clock before freshman running back Antario Brown ran for a seven-yard touchdown for NIU to retake the lead 38-33.

The Huskies carried momentum into the fourth, forcing the first punt of the game and extending their lead with a 45-yard field goal by redshirt sophomore kicker John Richardson.

McCall hooked up with Likely again on a triple reverse pass for a 40-yard touchdown with 9:07 remaining. A failed two-point conversion meant NIU kept the lead at 41-39.

The Huskies, one of the best fourth down teams in the country entering the game, failed to convert on a fourth and short in their own territory. On the next play, Bennett caught a shovel pass from McCall and outran the Huskies for a 34-yard touchdown.

Lombardi fumbled the ball away on the Huskies next possession, but a defensive stop gave NIU just over two minutes to put themselves in scoring range.

A first down conversion catch by redshirt junior tight end Joiner put NIU at the Coastal four-yard line with two seconds remaining. The Huskies lined up for one last shot, but the clock expired before the ball could be snapped.

The Huskies overall record finishes at 9-5, still finishing the year with the largest record turnaround in the Football Bowl Subdivision this season.