Film review: ‘The Harder They Fall’ 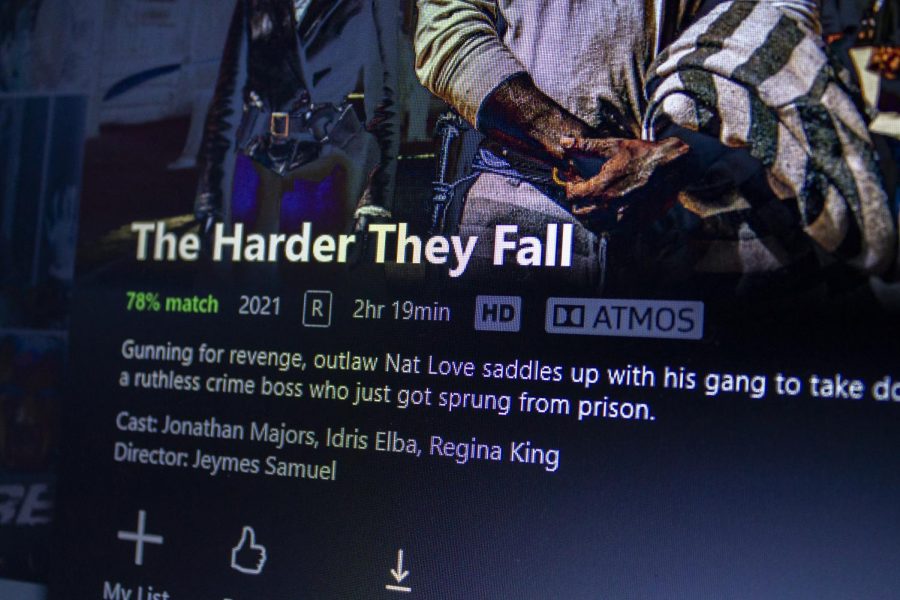 A photograph of "The Harder They Fall" on Netflix.

“The Harder They Fall” is a 2021 revisionist western film directed by Jeymes Samuel. The film features a star-studded cast of actors such as Jonathan Majors, Zazie Beetz, Idris Elba, Regina King, Delroy Lindo and LaKeith Stanfield. The performances by these actors are undoubtedly memorable and each character is charismatic, whether they are a villain or hero in the story.

The story centers on Nat Love, played by Jonathan Majors, an outlaw who discovers his arch nemesis and murderer of his parents, Rufus Buck, played by Idris Elba, is being released from prison. In order to get revenge and put an end to Rufus Buck once and for all, Nat Love reunites his gang.

This film is a revenge story that is entertaining from beginning to the end. All the characters somewhat play into old western tropes, but still have unique characteristics and flair. Even though Nat Love is the protagonist, members of his gang and Rufus Buck’s gang steal the show at various moments throughout the film.

The action is hard hitting and bloody at times, but at no point does it feel too gory. Some scenes are edited in a Quentin Tarantino style. The only downfall is that the final gun fight feels generic and all too familiar to fans of the genre. The hand-to-hand combat scenes were surprisingly a standout of the film and all of the action in general is executed glamorously along with upbeat music.

Rufus Buck is a fascinating villain, but his motives feel incomplete. That being said, his end goal and information about his past reveals an interesting twist on everything the viewer comes to know about the character. This adds more perspective upon a second viewing, leaving the audience to feel even more sympathetic.

“The Harder They Fall” stands tall because it subverts expectations by being a western film with a primarily Black cast that doesn’t focus on slavery or any type of oppression of Black people in relation to race in America. The film is produced by Jay-Z and features original music composed by Jeymes Samuel. There are some Easter eggs that can be missed in the blink of an eye, but nonetheless pay homage to Black culture in cinema and real life.

This film is great and undoubtedly a must watch. Western fans will love this film that has the ability to attract younger audiences to appreciate this oft-forgotten genre. “The Harder They Fall” is available for streaming on Netflix.