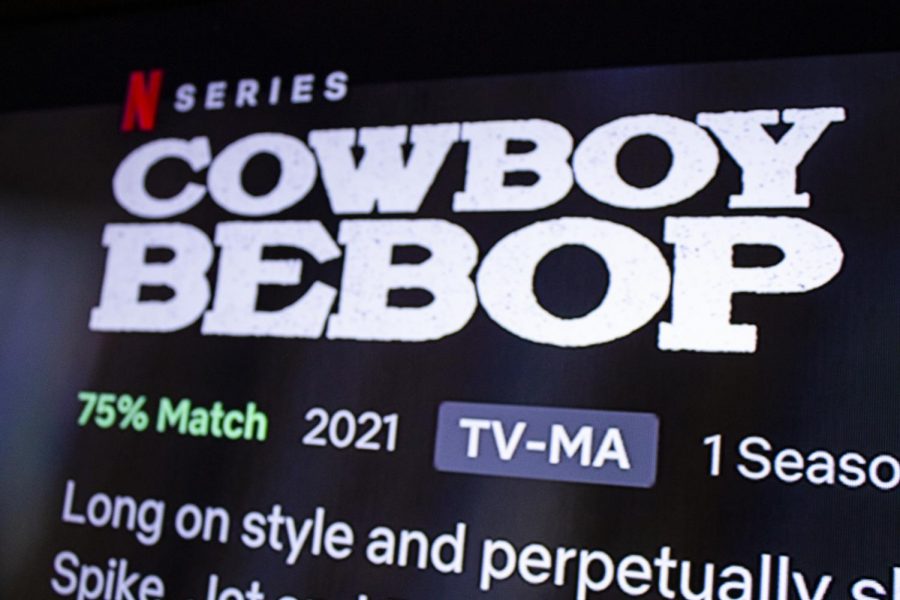 A photograph of the Netflix series adaption of "Cowboy Bebop" on Netflix.

Netflix’s adaptation of the classic anime series “Cowboy Bebop” is one of the most controversial shows to come out of Netflix, quickly reaching the service’s number one spot of its top ten. Longtime fans and casual viewers alike have very strong opinions about it.

In order to dissect the remake, one needs to understand what made the original such a classic to begin with. The original anime, directed by Shichiro Watanabe, revolves around the character Spike Spiegel and his misfit crew of space cowboy bandits who hunt down criminals. The show is unorthodox in its episodic nature, with episodes ranging from whimsical to melancholic. This style of storytelling helps sell the world as a place where actual people live.

With the original casting a glaring shadow, the live action is presented with a dilemma: Keep the anime’s original plot or do its own thing. The approach the live action was to try and fail to do both.

One of the few positives of the remake is that the cast is stacked with great actors like John Cho, Mustafa Shakir and Daniella Pineda, playing the iconic bebop crew members. Cho definitely infuses his take on Spike with a chill, playful persona, Mustafa’s version of Jet keeps the fatherly aspect audiences have come to love and Faye is still sardonic as ever. The crew has genuinely good chemistry with each other, but even with this stellar lineup the live action still has its problems.

The handling of anime content is definitely a sore spot, with some of the anime’s most iconic episodes rendered hollow in the new adaptation. Scenes once filled with dynamic expression and exhilarating drama are replaced with painstakingly boring lines.

The fight scenes are also a major point of contention in this remake. One of the anime’s biggest positives was it’s fluid fight scenes which represented the styles of each character fighting. Netflix however paints this over with amateurish choreography that makes it look like a new film student shot it.

The most egregious of these is the live action’s handling of the main villain Vicious and his relationship with Julia, a mysterious femme fatale that speaks very few words. In the original anime, Vicious is a silent threat and carries an oppressive aura that immediately screams his presence without him having to say a word.

The live action’s take on Vicious portrays him as a controlling loudmouth in an abusive relationship with Julia. By mischaracterizing both of them, the iconic conflict with Spike loses the charm it had in the original.

The worst crime of the adaptation is the betrayal of its style, as a key aspect of the original was its subtlety. “Cowboy Bebop” tackles themes of identity, loss and the inability to escape one’s past. The way the original presented the series never felt heavy handed or forced. The live action tries to tackle these issues, but ends up falling flat.