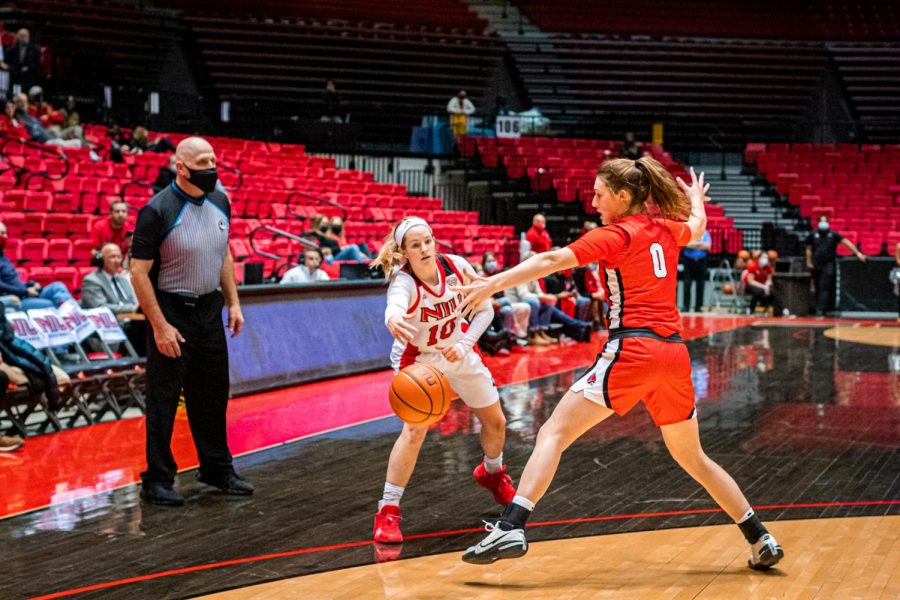 DeKALB — Women’s basketball’s losing streak continues after an 83-82 overtime loss to the Ball State University Cardinals Wednesday in DeKalb. This was the Huskies’ Mid-American Conference opener for the 2021- 2022 season.

The Huskies have dropped six consecutive games after the Cardinals bounced back in front as the clock wound down in the game’s overtime period.

“Every game really has a life of its own,” head coach Lisa Carlsen said. “Especially when you talk about MAC games, win streaks (and) losing streaks are fairly irrelevant in our preparation for the next opportunity to play.”

“We need to do what Ball State does but unfortunately, they came away with the win,” Carlsen said. “I give them credit. I give our kids credit for being resilient and fighting to get back in it. This one is going to be a hard one to swallow.”
Cardinals open 1st half with steady lead

The Cardinals opened up the scoring with a three-pointer from Ball State senior forward Thelma Dis Agustsdottir. Davis responded 20 seconds later with NIU’s first score on a layup to make the score 3-2 at the 9:25 mark.

The Cardinals extended their lead to 18-7. A pair of three-pointers by Koker and a pair of layups by redshirt senior guard Errin Hodges allowed NIU to bring the score to 25-15 with a minute on the clock. NIU closed out the first quarter trailing 25-17.

The second quarter took to a slow start as each team had only three points in the first five minutes. Poisson scored a three-pointer at the 4:59 mark. A layup soon after by Hodges brought NIU within three at 28-25 with 4:30 remaining in the half.

The teams left the court with Ball State ahead 40-32 at halftime. Cardinals junior guard Sydney Freeman tacked on a three-pointer at the buzzer to close out the half.
Huskies rally in second half
“It didn’t really affect us that much going down,” Koker said. “We just kept fighting. We weathered the storm of their runs. We wanted to get back in the game and that’s what we did.”

NIU’s Koker immediately went to work to open the second half, making a jumper 22 seconds in to make it 40-34 still in the Cardinals’ favor.

The two squads later went blow-for-blow beginning at the 5:44 mark. The Mid-American Conference rivals traded two-point scores and three-point scores in a span of 49 seconds. Ball State maintained their advantage as they led 53-43 with 4:55 left in the third quarter.

NIU entered the fourth quarter with the disadvantage, down 60-51. Koker opened up the final quarter with a five-point scoring run, recording two layups and a free throw to bring the score to 60-56.

The teams engaged in a shootout until the Huskies were able to gather a string of scores to put them down by a single point 65-64. Ball State gained separation before drawing back within a point of NIU, up 72-71 on the Huskies.

Davis made a layup with 34 seconds remaining to put the Huskies ahead for the first time of the game, 73-72. Davis was also able to add on a free throw being fouled by Ball State’s junior center Annie Rauch during the layup.

The Cardinals shot back with a layup by junior forward Jazmyn Turner to tie the game at 74-74 with 16 seconds left in the game. The final seconds bled off the game clock with the two teams still even, sending the game into overtime.
Heartbreak in overtime
The Huskies quickly rallied in the overtime period as they went off on a six-point scoring run to put them ahead 80-74 with 2:20 left. Ball State fired back with a free throw and a three-pointer to bring the score within two at 80-78.

NIU’s last score came from a Chelby Koker layup to extend the Huskie lead to 82-78. The Cardinals successfully climbed back thanks to a three-point score from Freeman and the game-winning rebound and layup by Clephane to take home the 83-82 victory.

“There were a lot of defensive breakdowns,” Poisson said. “It’s tough but we’ll be better next time.”

Each team had four players score in the double digits. Koker led all players in the game with 28 points on 11-23 shooting from the field. Poisson followed with 17 points on the day. The Cardinals boasted two players on the opposing sideline with 20 points or more. Ball State’s Clephane and Freeman had 22 and 20 points respectively.
Bouncing back against Ohio
Wednesday’s loss marked NIU’s first defeat at the Convocation Center as their home record falls to 3-1. Their overall record currently sits at 3-7 as they look ahead to their road matchup against a 6-3 Ohio University team that has not played since Dec. 21.

“Everybody in this league is going to be prepared regardless of players available (and) how long it’s been,” Carlsen said. “We’ll take two days to get ready for Ohio and hope that we get the opportunity to step on the floor.”

Tip-off against Ohio is scheduled for noon Saturday at the Ohio University’s Convocation Center in Athens, Ohio. The game will be available on ESPN3.