Huskies fall to the Toledo Rockets in first game action since Dec. 19. 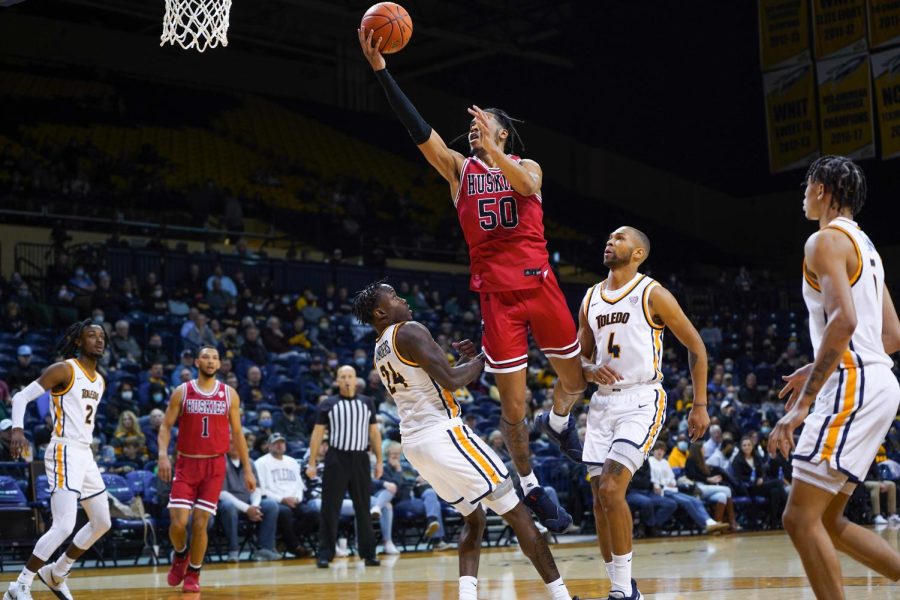 Senior guard Anthony Crump attempts a layup during Saturday's loss to the University of Toledo.

DeKALB — Men’s basketball opened Mid-American Conference play with a 94-63 defeat against the University of Toledo Rockets Saturday in Toledo, Ohio.

Saturday’s road matchup against the Rockets was NIU’s first game since its 61-60 loss to the University of Illinois-Chicago on Dec. 19. The Huskies entered Saturday’s game shorthanded as sophomore guard Keshawn Williams was unavailable to play.

“That’s why you have guys on scholarship,” head coach Rashon Burno said in a postgame interview with Huskie Sports Radio Network. “You hope guys can step up and compete and make plays. I just wanted a little bit more effort, a little bit more fight.”

The Rockets scored immediately from the tip on a breakaway dunk from junior forward JT Shumate. NIU fired back with a layup by junior guard Darweshi Hunter to tie the score 2-2 34 seconds into the game. Kent State soon extended their lead to 14-5 at the 14:35 mark.

Kent State junior forward Setric Millner, Jr. displayed finesse with a shot fake before advancing to the basket on a dunk in the seventh minute. The score allowed the Rockets to double NIU’s score, up 18-9.

The Huskies later ended a Toledo 8-0 scoring run with a layup from senior guard Trendon Hankerson. Senior guard Anthony Crump followed up with a successful free throw to trim the Rockets’ lead to 24-12 in the 10th minute. Crump and senior forward Chris Osten chipped into a Toledo 15-5 run, combining for two layups and a free throw. Kent State held a 42-17 lead with 3:11 left to play in the first half.

NIU responded with back-to-back scores from junior guard Edward Manuel to bring the score to 42-23 with 1:27 left. The teams each contributed a three-pointer and a pair of successful free throws to the score before halftime. The Huskies went into the locker room trailing their MAC rivals by 19, down 47-28.

NIU players were held to single-digit scoring in the first half. Manuel led the Huskies with nine points. NIU recorded a team total 37% shooting, going 10-27 from the field.

Toledo opened up the second half scoring after sophomore guard Ryan Rollins made a layup after 24 seconds. The Huskies and the Rockets traded a pair of successful jumper shots after Rollins’ half-opening score to bring the score to 53-32 at 16:46. NIU’s Crump then made a layup at 16:05 before Toledo tacked on eight straight points, putting their lead at 64-31.

The Huskies began a scoring drive, outscoring Toledo 14-5 to the lead to 66-45. The squads answered with ten points by both sides before the Rockets tacked on five to make it 82-55 in the 16th minute of the second half.

Toledo controlled the remainder of the game and finished with a three-pointer by freshman center Mihai Carcoana with 28 seconds remaining. The final buzzer went off with the Rockets on top by 31 and the scoreboard showing 94-64.

Thornton led NIU’s scoring efforts with 12 points, going 4-for-12 from the field and making 3-of-4 free throws. Manuel came second in Huskie scoring with 11 points after shooting 100% from three-point land and the free-throw line. The Huskies finished the game with a team total 37.1% shooting percentage from the field and 21.4% on 28 three-point shots.

NIU will return to the court at 7 p.m. Tuesday when the Huskies play their second straight MAC opponent in Kent State University. The Huskies will take on the Golden Flashes at the Memorial Athletic and Convocation Center in Kent, Ohio. The game will be streamed on ESPN3.