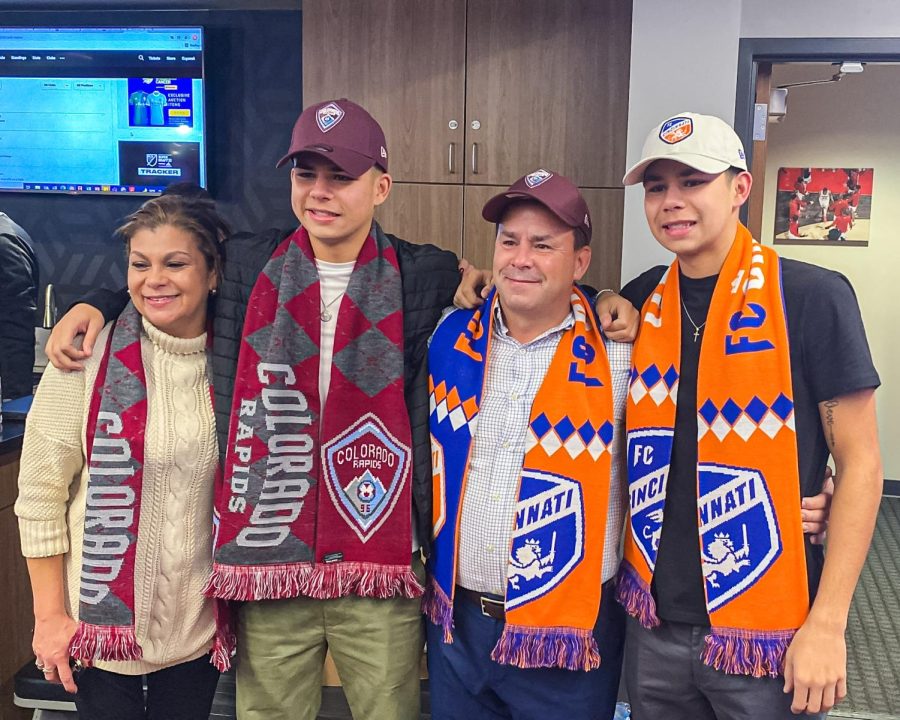 DeKALB— The Nelson Suite was not occupied by fans of a basketball game or concert. Instead, the luxury box suite inside the NIU Convocation Center was filled Tuesday with members of the NIU men’s soccer team, staffers from NIU Athletics, friends and family of Anthony and Nick Markanich, who waited anxiously for two-plus hours to hear their names called by members of Major League Soccer.

The Markanich twins, who both were named to All-MAC honors during the 2021 season, were expected to be selected during Tuesday’s MLS SuperDraft. Though it took some time, both brothers were selected. Anthony first, with the 26th pick by the Colorado Rapids, and Nick four picks later by FC Cincinnati in the beginning of the second round.

Tears were shed and their aspirations of being professional soccer players moved forward.

“It was a long afternoon as the picks were coming in,” said men’s head soccer coach Ryan Swan. “When Anthony’s name was called, you felt the relief and the joy in the room. I’m absolutely delighted.”
Draft Day opens
The SuperDraft kicked off just after 2 p.m. CT with Charlotte FC making its first-ever pick as an MLS club. Within moments of being placed on the clock by MLS commissioner Don Garber, Charlotte FC selected University of Maryland midfielder Ben Bender with the first overall pick. The draft was off.

The first 10 picks came and went, and the Markanich brothers were still on the board. With 27 picks up for grabs in the first round alone, the numbers were still on Nick and Anthony’s side.

As picks 10 through 15 came in. Jokes and bursts of laughter were replaced with silence. With each pick, faces began to harden. The room watched as players from across the country celebrated hearing their names called.

Anthony, who was sitting front and center with his brother, left the room multiple times during the draft and nerves seemed to play a factor.

“Just sitting here for an hour or two waiting; it gets long,” Anthony Markanich said. “It felt good to just get up and refresh your head a little bit.”

With the 25th pick, the Columbus Crew selected Notre Dame defender Phillip Quinton, leaving just three remaining first-round picks and Nick and Anthony still awaiting the call.
The call of a lifetime
The waiting lasted almost three hours, but the Colorado Rapids gave the Nelson Suite something to cheer about when the club selected Anthony Markanich with the 26th pick in the 2022 MLS SuperDraft.

The group of people erupted in celebration as the announcers called out “from Northern Illinois,” even before Anthony’s name was announced.

Anthony is joining Colorado after it claimed the best record in the Western Conference, earning the top seed in the MLS Cup before being eliminated in the conference semifinals by the Portland Timbers.

“I worked hard for this moment and keep playing how I am and earn a spot there hopefully,” Anthony Markanich said.

While Anthony had heard his name called and the celebration had begun, sitting to Anthony’s right was his brother Nick, still waiting for his name to be called and for his parents to exhale and soak in the moment entirely.
The 27th pick
After the celebration simmered down and everyone returned to their de facto places, like clockwork the room went silent and all eyes drew back to the live stream to await the pick from FC Dallas.

The MLS commentary crew pivoted from the discussion about Nick’s brother to announce that Dallas had found their man.

The 2021 Mid-American Conference player of the year was not selected in the first round.
The longest 4 pick gap
As Anthony fielded questions from the media, Nick sat with his face in his hands waiting to hear his name. His mother and father, Anthony Markanich Sr., encouraged Nick to keep faith. NIU Athletic Director Sean Frazier sat with Nick as well, but his dad knew Nick’s moment would come. “This will come,” Markanich Sr said throughout the first-round coverage.

“Just keeping them grounded. Just letting them know it was just a matter of time,” Markanich Sr. said. “We knew there was a chance for them to go early, but nothing is guaranteed.”

This response came in what was Markanich’s second-take on the interview, as midway through the first interview, the room erupted when FC Cincinnati selected Nick Markanich with the 30th overall pick in the MLS SuperDraft.

The group quickly regathered and the celebration continued. Hats and scarves were donned and the champagne was popped, but at the end of the day, two All-Conference Huskies’ achieved their dreams of playing professional soccer.

“I had a feeling it was coming,” Nick Markanich said. “Hearing (Anthony’s) name was a sense of relief for both of us and I was just waiting for my turn to come.”

For 17 years, Anthony and Nick Markanich were bonded by both brotherhood and team camaraderie. Now they split to go their own competitive ways, but have countless support from those closest to them and as the two hugged it out, hiding the tears, it was clear their brotherhood would always come first.

“We knew this day would come,” Anthony Markanich Sr. said. “For them to go 17 years of playing soccer together on the same team, it’s been an amazing and wonderful journey and I couldn’t ask for anything else.”