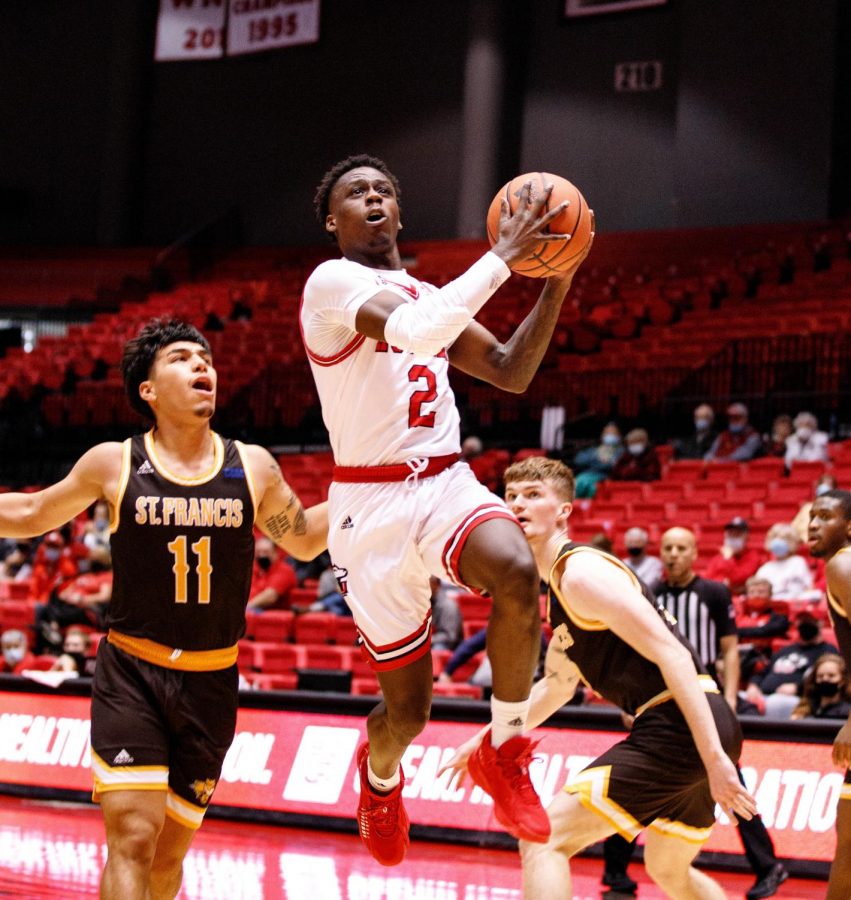 The Huskies were able to successfully rebound from a 94-63 blowout defeat in their Mid-American Conference opener against the University of Toledo on Saturday.

“We went out and confronted our demons,” head coach Rashon Burno said in a postgame interview with Huskie Sports Radio Network. “We didn’t take the day off and guys got after it. Hopefully we can bottle this up and take it forward with two home games.”
Starting off quick
The Golden Flashes won the tip-off to start the game, but the Huskies ended up striking first after NIU senior guard Anthony Crump made a three-pointer. NIU led 3-0 after 2:40 of play. Senior forward Chris Osten, making his second start of the season, added a free throw in response to a Kent State three-pointer to keep NIU ahead 4-3.

Kent State accounted for seven of the following eight scores to stretch themselves out to a 16-6 lead with 10:44 remaining in the half. The Huskies made back-to-back scoring plays in the form of a dunk and a jump to narrow Kent State’s lead to 16-10.

A trio of successful free throws from each saw the Golden Flashes maintain a six point lead at 19-13 with 7:12 remaining. The Huskies continued to surge as a layup and a pair of three throws shorted their deficit to 19-17 at the 6:29 mark.

Kent State then made a jumper 19 seconds later to give them a two-possession lead. KSU maintained a two score lead over NIU up until the final score of the half. Huskie senior guard Trendon Hankerson made a three-pointer with six seconds remaining to slim the Golden Flash lead to 37-34 by halftime.

NIU opened the second half scoring with a layup to take KSU’s winning margin down to one. The following layup by junior guard Kaleb Thornton with 17:25 left gave the Huskies their second lead of the game. A three-point jumper by Kent State redshirt senior forward Tervell Beck 57 seconds later tied the score at 40-40.
Huskies pull ahead
The two sides engaged in a shootout before a Kent State missed free throw allowed NIU to go ahead with a layup, leading 46-45 with 12:10 remaining. The teams were later tied again at 49-49 until the Huskies took themselves to a 54-49 lead following a Kingsley Okanu jumper in the game’s 36th minute.

NIU took their lead to 60-53 with just under five minutes left. The Golden Flashes came roaring back, taking the score to 60-59 with a layup, dunk and two free throws. The Huskies extended themselves to a 63-59 advantage in the final minute before Kent State made a layup to bring it within two.

A foul on Kent State freshman guard Jalen Sullinger all but sealed an NIU victory. Hankerson made both free throws to put the Huskies up 65-61 with 14 seconds on the clock. The Golden Flashes put up one last jumper before the buzzer, ending the night with a 65-63 win for NIU.

NIU closed out the game with 48.9% shooting from the field, making 23-47 shots. The three-point attack by the Huskies was minimized with only 13 attempts, 7 of which were successful. Thornton led Huskie scorers with 17 points, followed by 14 points from Hankerson. Kingsley Okanu also made an emergence Tuesday, scoring 13 points in the game,10 coming from the second half alone.

“We’ve got to do a better job of getting (Kingsley Okanu) the ball,” Burno said in a postgame interview with ESPN. “He’s shown that he can score the ball. He’s going to be a focal point for us moving forward.

The Huskies will resume action Saturday, when they host Eastern Michigan University in the second game of a doubleheader with women’s basketball. Play will begin at 3:30 p.m. in the Convocation Center. The game will be available on ESPN3.