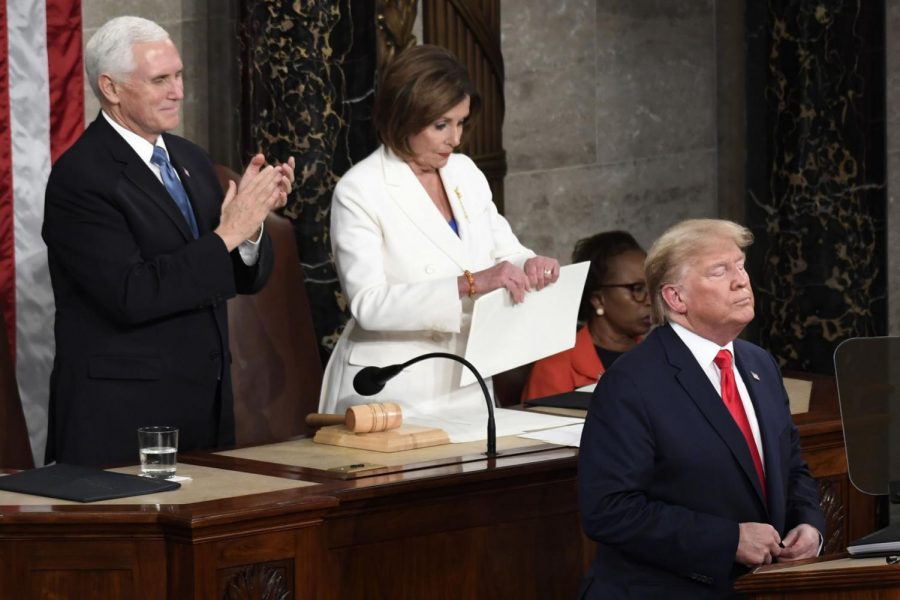 House Speaker Nancy Pelosi (right), tears her copy of President Donald Trump’s State of the Union address Tuesday after he delivered it to a joint session of Congress on Capitol Hill in Washington.

President Donald Trump gave his third State of the Union address Tuesday. Meant to show the country that it is in a good state, the address showed that there is a huge divide between the political parties. While the address is given every year, this year’s address was given under special circumstances.

For the first time in over 20 years, an impeached president gave the State of the Union. Trump made a smart decision not to mention the impeachment trial and instead remained optimistic for the country.

However, as most State of the Union addresses show by only having members of the president’s political party clapping and cheering, there is still a huge divide between political parties in the country. When Trump entered the room for his speech, he did not shake hands with the Speaker of the House Nancy Pelosi, and Pelosi, in turn, ripped up her copy of Trump’s speech when he was finished.

Trump mentioned that the state of the union is stronger now than it has ever been, but the divide of trust in the president is the largest it has been in 74 years based on a Jan. 21 article by CNN. If the union was so strong, an extensive political divide would not be the case.

Trump tends to display narcissistic behavior, and that was present during his speech. He spent a good portion of the address praising himself and talking about how he has made the country better, as well as bashing the Obama administration throughout his speech.

“Unlike so many that came before me, I keep my promises,” Trump said.

This has not been the case, with Trump promising to have Mexico pay for the border wall and get rid of nuclear weapons in North Korea during the 2016 election.

Trump did a great job at being optimistic during his address, but seeing how the political parties are still so divided shows that the country still has a long way to go.