Fill in the blank: The winner of Super Bowl 56 will be…

The sports staff of the Northern Star makes its predictions for who will take home the Lombardi Trophy on Feb. 13. 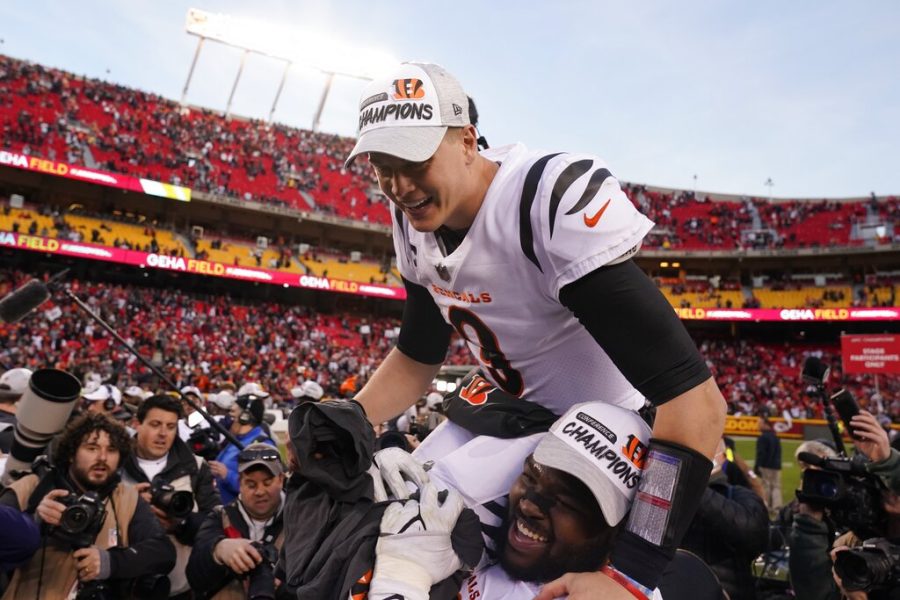 With the Championship round of the 2021-22 playoffs now in the books, only two teams remain as the Cincinnati Bengals and the Los Angeles Rams square off for a Super Bowl title on Feb. 13. Ahead of the biggest football game of the year, the time for predictions has arrived as one team looks to be crowned world champions.
Waleed Alamleh, Sports Reporter
Pick: Cincinnati Bengals

The Cincinnati Bengals have had one of the best season-to-season turnovers in recent NFL history, going from one of the worst teams in the league last year with a 2-14 record to reaching the Super Bowl in improbable fashion. The Bengals have been playing with moxie and energy all season long, thanks to its leader quarterback Joe Burrow. Burrow has already become one of the top quarterbacks in the league in only his first full season after tearing his ACL and MCL last year.

Burrow leads a young Bengals offense that is filled with talent across the board. Rookie wide receiver Ja’Marr Chase has already established himself as a #1 option with over 1,400 yards and 13 touchdowns this year. Running back Joe Mixon has been a staple in the Bengals’ offense for the past four years, rushing for 1205 yards this season.

On the defensive side, the Bengals lack star power at an individual position, but as a unit, they can make the most explosive offenses look pedestrian. Take the American Football Conference championship against the high-flying Kansas City Chiefs. The Bengals’ defense held the Chiefs’  #4-ranked scoring offense to just three points throughout the second half and overtime.

This Bengals team just has a different feel to them compared to past Marvin Lewis-led teams that never seemed ready for the moment. The major difference in those past teams is confidence, specifically their confidence in Burrow. The team knows the moment will never be too big for him, whether it’s the College National Championships or AFC Championship. The Bengals will never get down on themselves because of the belief they have in their quarterback.
Carlos Finney, Sports Reporter
Pick: Los Angeles Rams

This Super Bowl is going to be yet another great game with two quarterbacks making their Super Bowl debuts. The number of mistakes will be the difference in this one with both teams having two high-powered offenses. I was torn between who would win this one because each team doesn’t really have any flaws.

The deciding factor that struck my attention the most though was the Bengals’ offensive line versus the Rams’ defensive line. The Bengals’ offensive line has struggled all year and let quarterback Joe Burrow get sacked a playoff-record nine times against the Tennessee Titans on Jan. 22. The Rams have arguably the best defensive front in football with Aaron Donald, Von Miller and crew. The Rams will try to expose this weakness the most while cornerback Jalen Ramsey tries to shut down Bengals star wide receiver Ja’Marr Chase. The Rams have everything it takes to be the better team on both sides of the ball and they have an edge already with two of the best wide receivers in Odell Beckham, Jr. and Cooper Kupp. These advantages will show Super Bowl Sunday and the Rams will be crowned champions.
Skyler Kisellus, Sports Editor
Pick: Cincinnati Bengals

Although the Bengals face the lofty challenge of managing the Rams’ defensive front, Cincinnati has proven it can hold strong in the face of menacing defenses such as those of the Tennessee Titans and Kansas City Chiefs. On the defensive side, the Bengal defense has proved its ability to contain powerhouse offenses, holding the Chiefs to three points in the second half not once, but twice in one season.

After taking down the top-seeded Titans in the Divisional Round on Jan. 22 and beating the odds to qualify for the postseason, the Bengals have proved time and time again that there isn’t much that can stop their high-powered offense. Based on recent finishes for Cincinnati, the leg of rookie kicker Evan McPherson looks to be their best shot at sealing their first Super Bowl victory in franchise history.
DeOndre Saunders, Sports Reporter
Pick: Los Angeles Rams

The Rams will win because they are dominant defensively and offensively. On the offensive end, wide receiver Cooper Kupp is having a career year, leading receivers in all categories. You also have receiver Odell Beckham, Jr. who has improved since being signed midseason after a poor start with the Cleveland Browns.

On defense, you have defensive tackle Aaron Donald, a monster on the defense. Cincinnati Bengals quarterback Joe Burrow has a history of being sacked a lot, which will likely be the case when he faces Donald. The Rams also have cornerback Jalen Ramsey, a lockdown defender in man and zone coverage.

The Los Angeles Rams will be the 2022 Super Bowl champions. Rams quarterback Matthew Stafford’s playoff record before entering the 2022 playoffs was 0-3. Stafford has been in the league for 13 years and has only been to the playoffs three times with his previous team, the Detroit Lions. Being traded to the Rams has proven to be the best move of his career. He is now 3-3 in the playoffs and will win in his first Super Bowl come Feb. 13.
Noah Silver, Sports Reporter
Pick: Cincinnati Bengals

This Super Bowl has two teams who not only deserve to be here, but have overcome all the odds to make it to the big game. Matthew Stafford has shed the “can’t win a big game” moniker and led the Rams past the Arizona Cardinals, the defending champions in the Tampa Bay Buccaneers and the San Francisco 49ers.

Wide receiver Cooper Kupp has been on fire with over 100 receiving yards in the past two games and defensive end Aaron Donald has been a game-wrecker, disrupting the running and passing games on nearly every play. The question with the Rams will come down to head coach Sean McVay. Will he outcoach himself into oblivion? Or will he stay true to his guns and lead his team to the promised land?

Joe Burrow has cemented himself as “America’s quarterback” after defeating the Las Vegas Raiders, the top-seeded Tennessee Titans and the juggernaut Kansas City Chiefs. With a Super Bowl win, Burrow would become the first number one overall pick to lead his team to a Super Bowl victory in his first two years. He could also become the first player to win a National Championship, the Heisman Trophy and Super Bowl in three years.

Wide receiver Ja’Marr Chase has been a man possessed all season, setting record after record as a rookie. Kicker Evan McPherson has been lights out this postseason, going 12-for-12 on field goals, including two game-winners. The only question left for the Bengals: Is the stage too big for them? No matter who wins, this is the Super Bowl matchup everyone deserves. Every football fan is a winner this year.