Bench stepping up for women’s basketball 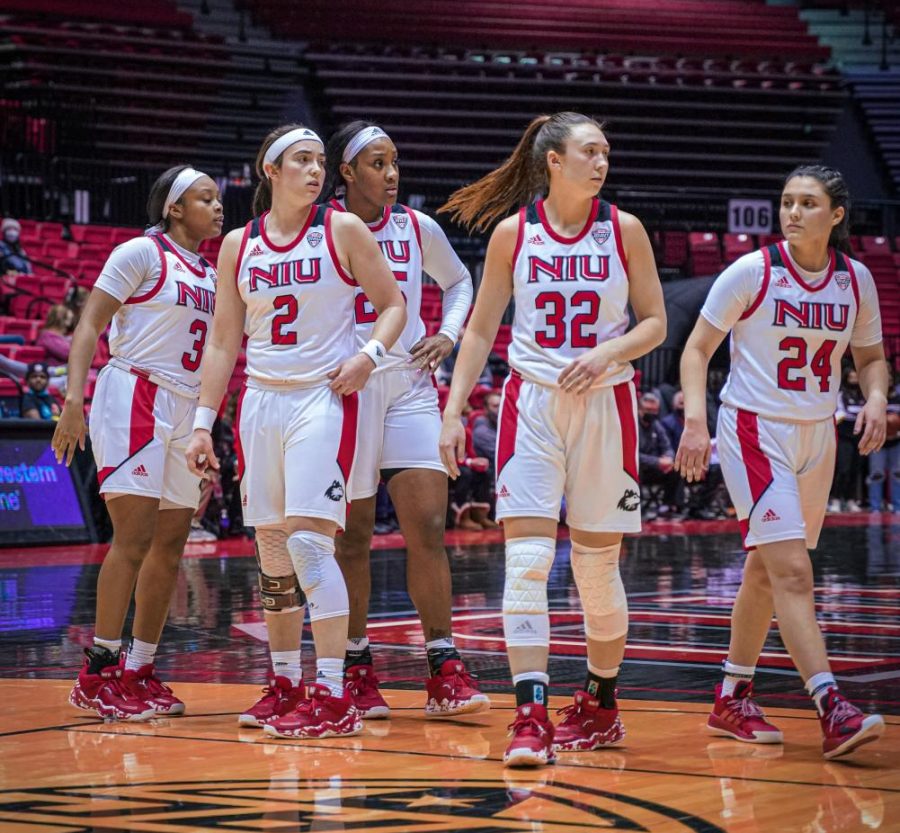 Players need to step up for the NIU women’s basketball team due to two starters being injured. Junior guard Chelby Koker will be out for the remainder of the season with a knee injury and redshirt senior guard Errin Hodges is day-to-day with an ankle injury.

Head coach Lisa Carlsen has looked down the bench and adjusted her lineup because of the injuries. Players such as redshirt senior Paulina Castro, redshirt freshman Sidney McCrea, sophomore Jayden Marable and graduate guard Nia Ahart have stepped up when their number has been called.
Filling in the holes on the lineup
Marable has taken the place of Koker as the primary ball-handler for NIU. Over the past four games, she has averaged four points, five rebounds and 2.5 assists per game. She had done a good job of getting defensive rebounds and running fastbreaks.

“(Marable) has been thrown a lot of different challenges already and has handled them very well and I have been proud of her progression,” Carlsen said.

Ahart has taken Hodges’ spot and come out of her shell, making her presence known on the team. In Sunday’s game against Ohio University, she had 16 points, eight assists, and seven rebounds. She has shown that she can score and distribute the ball well to her teammates.
Reserve players making impact for NIU
The bench has played a huge role in the team’s success since the lineup became afflicted with injuries. Castro is one of the players off the bench who has made an impact in stretches down the game for the Huskies with her shooting.

In a road win against Western Michigan University on Jan. 31, Castro had one of her greatest games of the season. She came off the bench, scored 15 points and went a perfect 5-for-5 from the three. Her shooting is what NIU needs: a person who can come off the bench and put some points on the board when junior forward A’Jah Davis comes out of the game.

Another bench player who has been making an impression is McCrea. She has come off the bench and become a spot-up shooter for the Huskies. She is an important factor coming off the bench as defenders seem to overlook McCrea’s shooting ability from the 3-point line.

McCrea scored nine points going 3-for-3 from three on Feb. 2 in a game against Bowling Green State University. She followed that game by scoring 11 points Sunday against Ohio. McCrea has shown that she can contribute and knows her role on the team.

“My role is to take open shots and knock them down,” McCrea said. “That requires for me to keep practicing and staying in the gym.”

Carlsen touched on the depth she has on her bench and what they need to do to win these last couple of games.

“I think they have a great understanding that if we’re going to have success, we have to do it together,” Carlsen said. “We have a group right now that understands when their number is called they need to be ready to go and they get it which makes super proud of them.”
Keeping the ball rolling
On the starting lineup, Davis and senior guard Janae Poisson need to continue doing what they do. Davis needs to keep being aggressive in the paint and get to the free-throw line to convert points. Poisson needs to keep being a two-way player by shooting mid-range shots and 3-pointers and being aggressive on defense.

NIU’s record is now 9-11 overall and 6-6 in the Mid-American Conference. They have been 2-2 since Koker has been out, but have been an offensive threat in these past five games. If the bench keeps contributing offensively as they have been, the Huskies will be in contention for the MAC championship.