James Harden is expected to make his 76ers debut vs. the Cavs 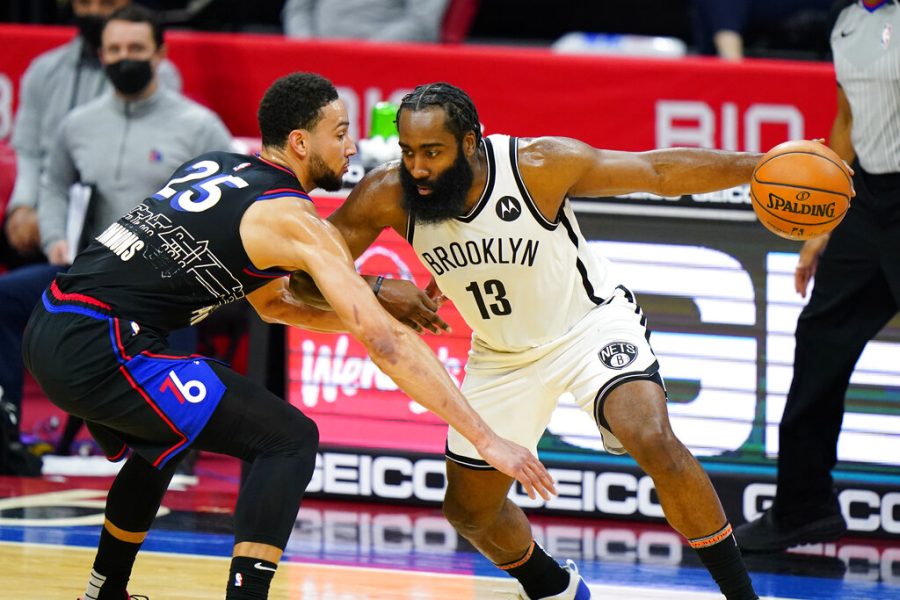 Brooklyn Nets' James Harden (13) tries to drive past Philadelphia 76ers' Ben Simmons (25) during the second half of an NBA basketball game, Saturday, Feb. 6, 2021, in Philadelphia. Harden was traded Thursday to the 76ers as part of a blockbuster trade sending the former league MVP to Philadelphia. (AP Photo/Matt Slocum, File)

Right after completing a blockbuster trade, the Philadelphia 76ers return to action in their quest to move up in the Eastern Conference standings.

The Cleveland Cavaliers (34-21) will travel Saturday to Philadelphia, Pennsylvania, to take on the Philadelphia 76ers (32-22) at 7:30 p.m. E.S.T. at the Wells Fargo Center. This will be the first of four matchups of the season for these two top-seeded Eastern Conference teams, and a marquee standout for NBA games this weekend.
What happened prior
Philadelphia just made a major splash at the trade deadline, ending the Ben Simmons saga by trading him, Seth Curry, Andre Drummond and two future first-round picks in exchange for former league MVP James Harden and forward Paul Millsap of the Brooklyn Nets.

Cleveland also stirred the pot before the trade deadline, acquiring guard Caris LeVert and a second-round pick for point guard Ricky Rubio and multiple protected picks. Both ballclubs will look to integrate their new players and familiarize themselves with playing without their old teammates.
Why it matters
With roughly a little over 25 games left in the NBA season, teams will really begin to jockey for playoff seeding in anticipation of deep runs. Cleveland has surprised many, sitting at third in the Eastern Conference, while Philadelphia trails in the fifth seed, just 1.5 games back from earning home-court advantage. In what could be a possible 3-6 or 4-5 seed preview of the playoffs, tiebreaking implications will be riding on this mid-February matchup.

Both teams will be coming off the first night of a back-to-back. Cleveland will have just traveled from a match with the Indiana Pacers, while Philadelphia will have finished hosting the Oklahoma City Thunder.