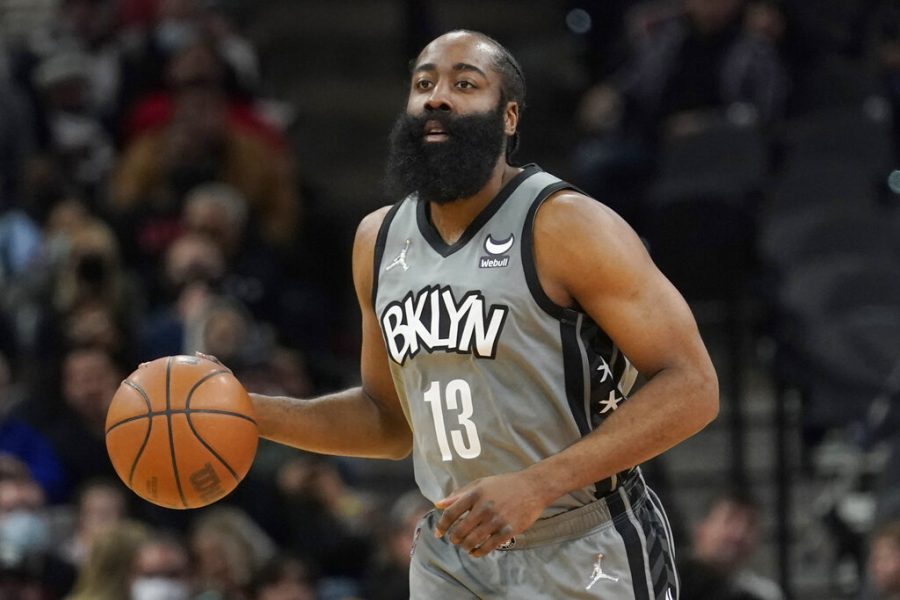 FILE - Brooklyn Nets guard James Harden (13) is shown during the first half of an NBA basketball game against the San Antonio Spurs, Friday, Jan. 21, 2022, in San Antonio. The Philadelphia 76ers have traded Ben Simmons to the Brooklyn Nets for James Harden as part of a multiplayer deal. The trade was confirmed by multiple people who spoke to The Associated Press Thursday, Feb. 10, 2022, on condition of anonymity because the trade had not been announced. (AP Photo/Eric Gay, File)

With the National Basketball Associations’ trade deadline just passing, the biggest move comes via a blockbuster trade between the Brooklyn Nets and the Philadelphia 76ers, landing former MVP shooting guard James Harden on the sixers squad. Alongside Harden, the 76ers also acquired forward Paul Millsap to pair with their MVP-caliber center Joel Embiid.

Philadelphia was finally able to get rid of the Ben Simmons-shaped “cloud” over the team, shipping the all-star guard, along with guard Seth Curry, center Andre Drummond and two first-round picks, as first reported by ESPN insider Adrian Wojnarowski.

This trade is fascinating on so many levels, not only because of the big-name status of the players involved, but the potential of what these players can do for their new teams.

For the 76ers, they have the potential of getting a new age duo of Shaq and Kobe with their guard and big man combo. If Harden can come in with the right attitude, which he should since he essentially forced this trade, and Embiid can stay healthy, the Sixers could run the Eastern Conference for years to come.

As for Brooklyn, their amazing big three of Harden, Kevin Durant, and Kyrie Irving gets broken up, having only played 16 out of a possible 140 games. The Nets aren’t in a bad spot at all, in fact, they could be an even better team if all can go right with Simmons. Simmons has not played a game all season because of  “personal reasons” relating to his mental health and the last time we saw him on a basketball court, he was running away from the free-throw line in a pivotal playoff game for the 76ers.

If Simmons can beat these free-throw demons and return to his All-Star level play, he’s still one of the best passers in the league. Surrounding Simmons with Durant, Irving and a plethora of shooters, the Nets will be in a great spot.