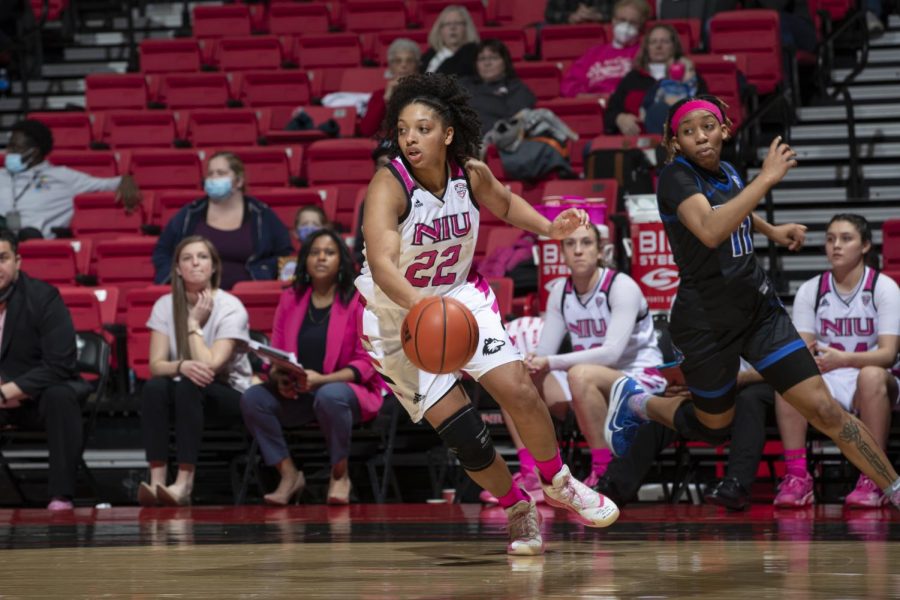 DeKALB — Women’s basketball won an overtime victory at home against the University at Buffalo Bulls 69-64 Saturday at the Convocation Center.

Junior forward A’Jah Davis got a career high in rebounds as she grabbed 21 rebounds.

NIU went into this game as the 9th seed in the Mid-American Conference looking to climb up the ranks as they went against the number two seed in Buffalo.

Huskies looked for a win against the Bulls after losing to them 61-68 on Feb. 6. The Bulls had snapped the Huskies’ three-game winning streak the last time they played.

The Huskies were up at halftime 28-26. A’Jah Davis and Poisson led the Huskies in scoring with nine points each. Fair led the Bulls with 10 points.

NIU was rolling in the third quarter as they took a 10 point lead, 41-31 with 4:47 left after a made jumper from graduate guard Nia Ahart.

Sophomore guard Jayden Marable made a jumpshot for NIU to take a three point lead, 50-53 with 38 seconds left. Bulls forward Georgia Wolley made a 3-pointer with 27 seconds left.

NIU had the ball with 26 seconds looking to win the game. Davis would go for a layup and miss and the Bulls would run the ball up the court. Fair would drive to the hoop looking to score and win the game but she missed. The game would go into overtime tied 55-55.

The Bulls tried in a great effort to win the game but they couldn’t close out because the Huskies were knocking down free throws through the entire five minutes of play. The Huskies won this game 69-64.

Bulls’ Fair led all scorers with 27 points. Poisson led the Huskies in points with 26 points. Davis recorded another double-double with 19 points and 21 rebounds.

The Huskies head on the road to Kent, Ohio, as they play Kent State University at 6 p.m. CT on Wednesday.