Comedians are at the forefront of free speech 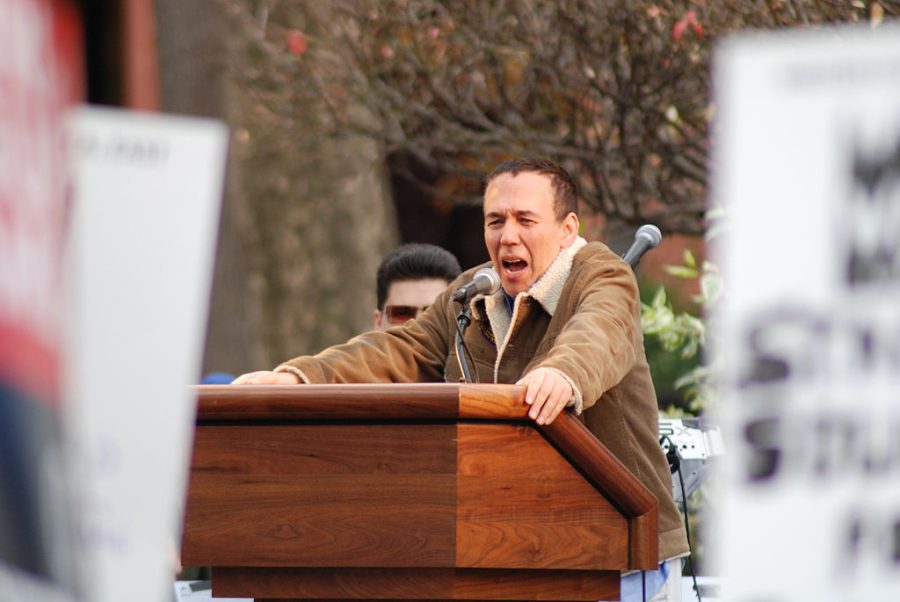 Gilbert Gottfried at the Writer's Guild of America East Solidarity Rally in Washington Square in 2007.

One of the constants of America is the continuous battle between free speech and censorship. What is an acceptable practice of the First Amendment and what isn’t has been continuously up for debate. Now, some of the biggest fighters for free speech are stand-up comedians who continuously face public scrutiny for their jokes.

In the past, stand-up comics were subject to harsh censorship by the U.S. government with comedians like Lenny Bruce and George Carlin being arrested in the 1960s and ‘70s after delivering profane humor. In 1978, the Supreme Court determined in the case FCC vs. Pacifica Foundation that a radio broadcast of George Carlin’s “Seven Dirty Words You Can’t Say On Television” was indecent and could be limited.

Now, cries for censorship seem to be more from the public. People on Twitter have replaced bigwigs in Washington trying to censor comedians’ speech.

In reaction to Dave Chappelle’s latest Netflix special, “The Closer,” many critics pointed to his jokes about the transgender community and demanded that his special be taken off Netflix.

“We are trying to support creative freedom and artistic expression among the artists that work at Netflix,” said Ted Sarandos, co-CEO of Netflix in an interview with Variety in October. “Sometimes, and we do make sure our employees understand this, because of that, because we’re trying to entertain the world, and the world is made up of folks with a lot of different sensibilities and beliefs and senses of humor and all those things. Sometimes, there will be things on Netflix that you dislike.”

Sarandos also acknowledged the validity of Netflix employees who were planning a walkout in protest of Chappelle’s special.

“First and foremost, I should have led with a lot more humanity,” Sarandos said. “Meaning, I had a group of employees who were definitely feeling pain and hurt from a decision we made. And I think that needs to be acknowledged upfront before you get into the nuts and bolts of anything.”

But one thing that needs to be acknowledged is how we take comedians too literally. We treat what comedians have to say as the voice of God when their primary goal is to be an entertainer. Not that there isn’t any commentary on what they do.

But as much as the work of George Carlin and “South Park” are incredibly thought-provoking with their commentary, their first priority is to make us laugh. As great as George Carlin’s stances on humanity’s ridiculous nature are, it’s unlikely that he thought we should actually bring back more barbaric forms of the death penalty like crucifixion, boiling people in oil and slamming people from catapults right into a brick wall.

I’m not saying that I find everything comedians say funny, but it’s all worthy of protection. Because comedy is imprecise. It’s walking on a volatile tightrope of anecdotes, gross-out stories, yarns, cultural norms, wordplay, sight gags, funny voices and bar mitzvah memories trying to find something to make us laugh.

When we feel a comedian crosses a line, we should let them know. But ranting on Twitter and jumping on the cancel culture bandwagon isn’t the way to go. Because of the nature of comedy, we should be willing to embrace comics if we feel they go too far.

Gilbert Gottfried’s 9/11 jokes made weeks after the tragedy were seen as too much, too soon and comic guests have crossed the line sometimes at Comedy Central roasts, which is fitting, given their nature. But Gottfried has apologized and gone on to become a comic legend. But now, it seems that comics are trying to avoid any kind of unpleasant scenario with Chris Rock and Jerry Seinfeld avoiding college campus gigs.

It’s hard to imagine legends like Richard Pryor, Sam Kinison, George Carlin or Bill Hicks existing today. However, it seems that people who are more established comic legends like Dave Chappelle, Bill Burr, Trey Parker and Matt Stone can get away with more. As much controversy as “South Park” has gained over 25 seasons, it has yet to be canceled (both on television and in the public eye).

The ones I really feel bad for are new comedians with a lot of potential like Taylor Tomlinson or Please Don’t Destroy. On the bright side, the more people attack comedians, the more comedians will fire right back and their use of words is far more deadly.

But comedians can heal just as much as they can hurt and their work deserves to be protected. Dave Chappelle’s special “8:46” is some of the greatest work I’ve seen from a comedian as he commented on the state of the world with a call for change against systemic racism. Bo Burnham’s special “Inside” provided an amazing look at the COVID-19 pandemic and showcased our insane habits during this strange period of existence.

But the best thoughts on the importance of comedy come from the animated series “Duckman” where the titular character, voiced by Jason Alexander, goes on a tirade supporting the offensive and off-color humor:

“Comedy should provoke! It should blast through prejudices, challenge preconceptions! Comedy should always leave you different than when it found you. Sure, humor can hurt, even alienate, but the risk is better than the alternative: a steady diet of innocuous, child-proof, flavorless mush! Demand to be challenged, to be offended, to be treated like thinking, reasoning adults. And raise your children to be the same. Don’t let a comedian, a network, a Congressional committee, or an evil genius take away your freedom to laugh at whatever you want.”

Sometimes comics may cross a line or say something you disagree with. But if I have to choose between Carlos Mencia and Bill Burr, I’m going with Burr every single time.