Trips scheduled for Tulsa and Kentucky. Vanderbilt to travel to DeKalb. 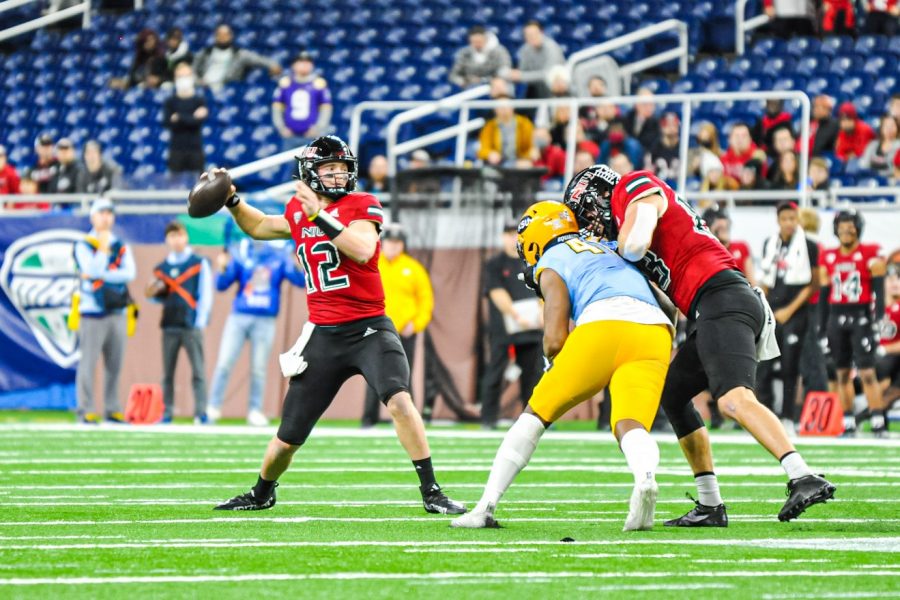 Junior quarterback Rocky Lombardi winds up to throw a pass in NIU's 41-23 victory over Kent State in the MAC Championship Game on Dec. 4 in Detroit. (Wes Sanderson | Northern Star)

DeKALB— The Huskies will look to defend the Mid-American Championship with a schedule that features two non-conference bouts with the Southeastern Conference and one with American Athletic Conference, as the 2022 football schedule was revealed Friday.

NIU will begin their 2022 football season with four straight non-conference opponents, including hosting an SEC team at Huskie Stadium for the first time ever.

The season will open Sept. 3 hosting Eastern Illinois University, followed by a road game in Tulsa, Oklahoma, a week later. This will be the first-ever meeting between the Huskies and Golden Hurricanes.

Head coach Thomas Hammock is ready to not just host an SEC school, but also compete and be ready for conference play.

After Toledo, the Huskies will hit the road for two weeks to face Eastern Michigan University and Ohio University on Oct. 22. Following the team’s bout with the Ohio Bobcats, NIU will take a break as the conference switches to its weekday “MACtion” game slots.

The Huskies will round out the season hosting three of the last four games at Huskie Stadium. The season finale is set for Nov. 26 against the University of Akron Zips.

The 2022 MAC Championship is set to be played at Ford Field in Detroit, Michigan, on Saturday, Dec 4. All game dates are set, but start times and broadcasting information have yet to be determined and will be announced at a later date.