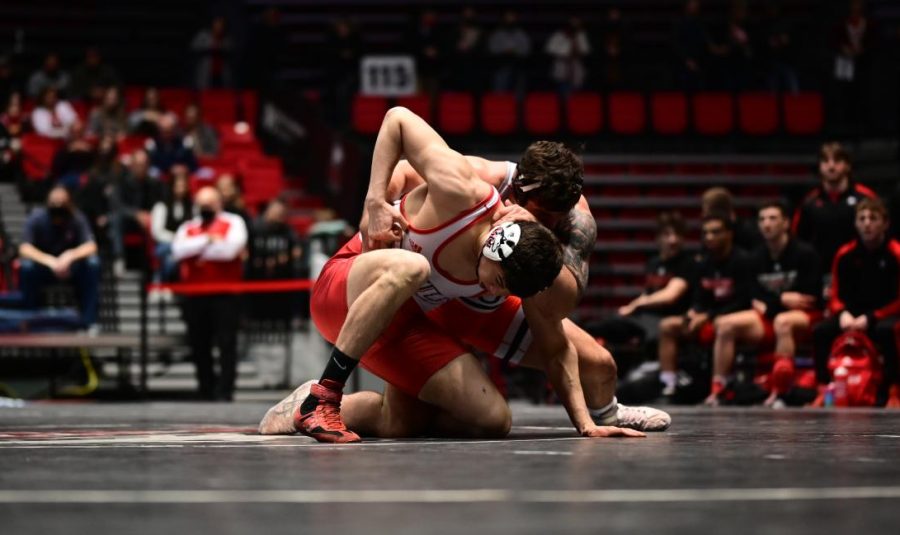 DeKALB — The NIU wrestling team wrapped up their season Friday as their three competitors in the NCAA Championships saw their runs come to a halt at Little Caesars Arena in Detroit, Michigan.
Redshirt seniors Mason Kauffman, Brit Wilson and redshirt junior Izzak Olejnik each went 1-1 during their outings on the first day of competition at the NCAA Wrestling Championships Thursday. The trio proceeded to be eliminated the following day, ending their respective seasons.
Olejnik and Kauffman take first round victories in first day of NCAAs
Olejnik’s first matchup of the 165-pound tourney was a 2-1 victory by decision over Gardner-Webb University redshirt junior Rodrick “RJ” Mosley. The following duel between Olejnik and University of Michigan redshirt sophomore Cameron Amine saw the first period go scoreless until Amine got out to an early 3-0 advantage by the end of the second period. Olejnik’s two points in the third were not enough to overcome his opponent, losing 4-2 by decision to end the day.

The opening match for 21st-seeded Kauffman at 174 pounds saw the Stratford, Wisconsin, native earn the upset win over the 11th-seeded University of Missouri redshirt sophomore Peyton Mocco 3-1. Kauffman’s next matchup against Oklahoma State University sophomore Dustin Plott resulted in an 8-2 decision loss for Kauffman.
Wilson eliminated early
Wilson’s first match had a different result from his two teammates as he lost 5-3 to University of Wyoming senior Tate Samuelson during Thursday’s first round of the 184-pound bracket. Wilson emerged with a 3-0 lead before Samuelson came back to tie the affair at 3-3. Samuelson then took down Wilson to win 5-3 in sudden victory. The evening consolation bout between Wilson and University of Pittsburgh redshirt senior Gregg Harvey saw the former earn a dominant 17-3 victory over the latter by major decision.

“This tournament is full of twists and turns,” head coach Ryan Ludwig said in an NIU Athletics news release following Thursday’s first day of competition in the NCAAs. ”Our guys have been doing a good job of staying focused and moving on to the next thing in front of them.”
Huskies sent packing in consolations
The second round of the consolation bracket featured a duel between Olejnik and North Carolina State University graduate student Thomas Bullard. Olejnik notched the 4-2 victory to advance into the third round and face University of Virginia senior Justin McCoy. The Virginia Cavalier prevailed over Olejnik 10-0 by major decision to eliminate him from NCAA Championship competition.

Kauffman’s first run in the consolation bracket pitted him against United States Military Academy West Point sophomore Benjamin Pasuik. Kauffman defeated Pasuik 3-2 and moved on to round three against Wyoming redshirt senior Hayden Hastings. The Huskie saw his journey to the next round halted as Hastings won the matchup 10-0 by major decision.
Wilson’s farewell to NIU
Wilson’s consolation run and NIU career came to a bittersweet end Friday after being bested by Cornell University junior Jonathan Loew 11-4 in the second round at 184. The Huskie veteran’s collegiate career drew to a close with a total of 113 wins, the second-most in NIU history.

“Brit has meant the world to this program in his time here at NIU,” Ludwig said in an NIU Athletics news release Saturday. “Outside of the wins, he’s led the way in establishing expectations of excellence in everything we do. Words can’t really capture what he’s brought to NIU wrestling.”
Looking ahead to the offseason
With their season now concluded, NIU wrestling will now have the offseason to replace departing talent and prepare for the 2022-23 regular season.