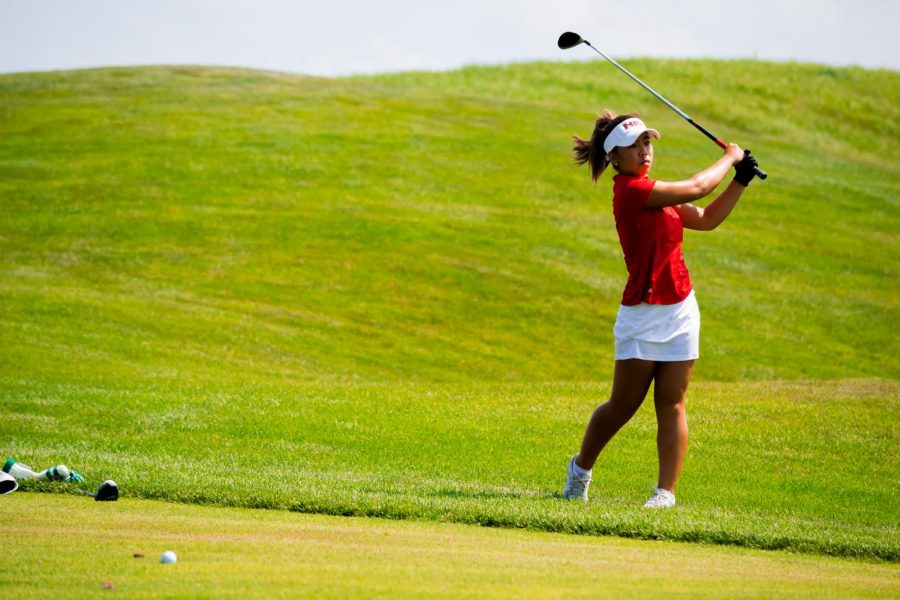 Sophomore Jasmine Ly hits an approach shot into a green during a qualifying round at Rich Harvest Farms Aug. 28

DeKALB — A faltering performance by the NIU women’s golf team at the Pinetree Collegiate saw them fall to tenth place after Tuesday’s final round in Kennesaw, Georgia.

Sophomore Jasmine Ly capped off the two-day tournament with a sixth place finish on the individual leaderboard. Ly hit scores of 72, 70 and 79 and notched a five-over-par performance in her fourth event of the spring competition schedule.

“Jasmine’s been playing fantastic,” head coach Kim Kester said in an NIU Athletics news release following the event. “She had an off day today, but overall, she’s played really well for us.”

NIU opened the tournament with rounds of 304 and 301 to place third in a 12-team field after Monday’s first day of competition. A score of 326 Tuesday, a season-high, saw the Huskies drop seven spots to end up tied with the University of Memphis at 67-over-par. The two teams finished ten strokes ahead of last-placed High Point University.

“We made some birdies (Monday) and that allowed us to put together the scores we did,” Kester said. “We didn’t make the on-course adjustments we needed to make. You’re not going to play the same every single day and you have to be able to adjust. We have to work harder to get the results we want.”

Tournament host Kennesaw State University emerged as the victor of the event after maintaining its first-place position for the duration of the tournament. Kennesaw State’s starting lineup also boasted the individual leaderboard champion as KSU junior Bella Kil hit two-under-par, the only golfer at the event to achieve a negative par score.

Freshman Jóhanna Lea Lúðvíksdóttir recorded the next highest finish amongst NIU golfers on the lineup. The Reykjavik, Iceland, product posted 20-over-par on the course, tying with seven other golfers for 37th place, including her teammate, senior Sofia Gomez Enriquez.

The Huskies now have the remainder of March off before resuming action at the Colonel Classic hosted by Eastern Kentucky University. The two-day outing for NIU begins April 4 at The University Club at Arlington in Richmond, Kentucky.