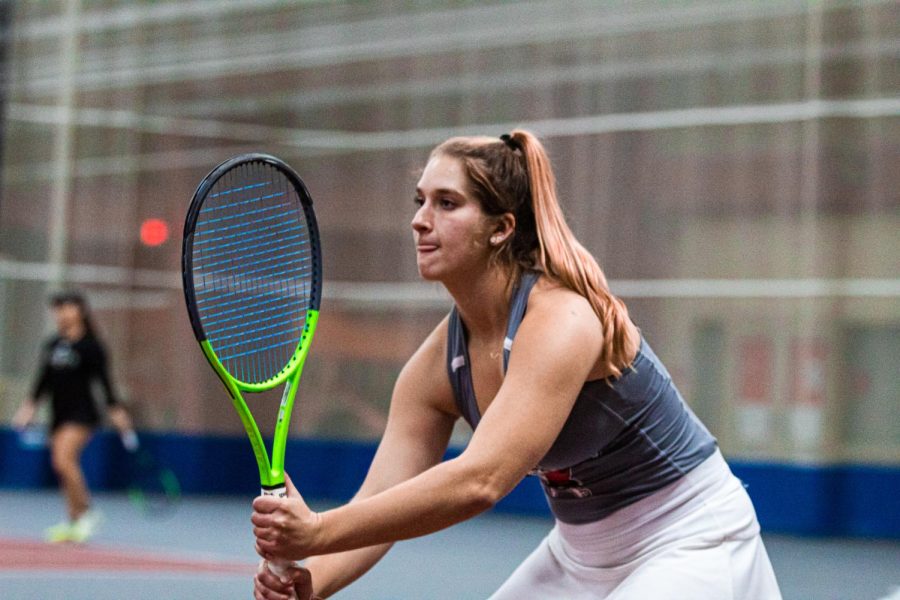 Freshman Reagan Welch assumes the ready position during a match against the University of St. Francis on Feb. 11. Welch earned victories in two singles matches and one doubles match during NIU's weekend trip in the state of Iowa. (Summer Fitzgerald | Northern Star)

DeKALB — Women’s tennis finished off weekend play Sunday with a road trip to Ball State University, falling 6-1 at Cardinal Creek Courts in Muncie, Indiana.
Doubles: 1-0 Ball State
The Cardinals got to a hot start in Sunday’s Mid-American Conference showdown. Ball State claimed the first two matches of the doubles round, winning 6-2 and 6-1 at the No. 1 and No. 2 spots respectively, to claim the doubles point. The unfinished match at No. 3 was closed with Ball State’s pair leading NIU 4-3.
Singles: 5-1 Ball State
Matters continued to favor Ball State as five of the six single matches resulted in Cardinals wins. Freshman Reagan Welch earned NIU’s only victory of the day.

The Greenbrier, Tennessee, product took her duel with Ball State junior Amy Kaplan to three sets. Welch fell behind with a 6-3 loss in the first set before tying the affair after the second. The super tiebreaker finished with Welch on top 10-8 in the final set.
Final result and looking ahead
The Huskies now sit at 13-10 on the season. NIU seeks its first win of the season against a Mid-American Conference opponent as they hold an 0-5 conference record.

Ball State remains one of the premier teams in the MAC with a 13-3 overall record and are 4-1 against the conference. The Cardinals’ lone conference loss came Friday at Eastern Michigan University, losing 4-3.

NIU returns home for their next matchup against Eastern Michigan Friday before heading back on the road to face Western Michigan University Sunday. Friday’s match will be held at DeKalb High School. Play is scheduled to begin at 1 p.m. CT.