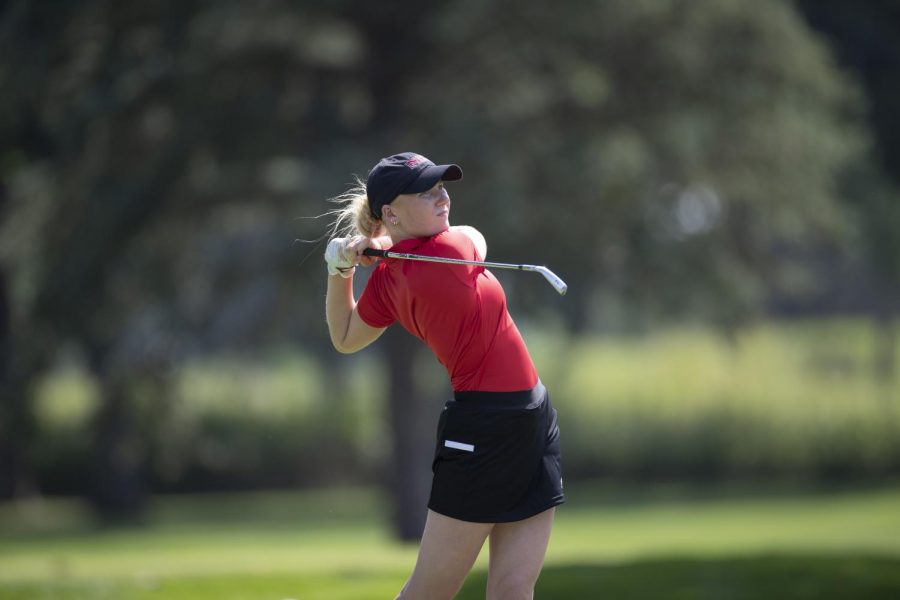 Freshman Jóhanna Lúðvíksdóttir practices at Rich Harvest Farms. Lúðvíksdóttir took her talents from Reykjavik to DeKalb to be a part of the NIU women's golf team.

DeKALB — A pair of impressive outings from sophomore Jasmine Ly and senior Sofia Gomez Enriquez helped NIU to a third place finish at the Colonel Classic Tuesday. The tournament began Monday and wrapped up Tuesday at the University Club at Arlington in Richmond, Kentucky.

Ly finished in a tie for eighth place with Eastern Kentucky University sophomore Rylea Marcum at seven-over-par. Ly’s teammate Gomez Enriquez tied for 11th place with six other competitors after hitting nine-over-par to end the event.

“It was good to see Sofia and Jasmine play well in this event,” head coach Kim Kester said in an NIU Athletics news release. “We have a quick turnaround with travel and then the (Redbird Spring Invitational) starts on Friday. That will be our last tournament before (Mid-American Conference) Championships so we’ll be looking to build on this finish.”
Round one
The opening nine holes of the first round saw Gomez Enriquez and freshman Jóhanna Lea Lúðvíksdóttir turn in even-par stroke counts. The Huskies closed out the first round of the event with a combined par score of 16-over between NIU’s top four team competitors. Lúðvíksdóttir produced the best score of the round after hitting two-over-par between 18 holes.

NIU’s score placed them fourth on the team leaderboard, one stroke behind Georgia State University and one stroke ahead of the University of North Alabama and Belmont University. Sophomore Emily Romancew ended the first round tied for 30th place while competing as an individual.
Round two
The Huskies continued their opening day of competition with signs of improvement to begin the second round. Four of six golfers participating in the tournament improved upon the par scores from the midway point of the first round.

A series of bogeys, a double bogey and a triple bogey in the back nine tallied on the NIU’s final scores of the second round. All but one of NIU’s competitors added at least two strokes to their scores to put the Huskies at 32-over-par to close the opening day of action. Ly’s two-over par on the round was the lowest amongst NIU players.

NIU maintained its fourth place ranking after the second round. They trailed the University of Akron, a MAC rival, by five strokes.
Round three
Ly and Gomez Enriquez displayed their best performances of the tournament with scores of even-par and two-over-par respectively in the third round. Their scores, paired with performances of one-over-par by Lúðvíksdóttir and junior Ahra Ko, gave NIU a third round score of 11-over-par.

“(Tuesday), two holes gave us trouble, and we need to clean up on the par fives, but overall, it was a solid day and a solid tournament,” Kester said.

The Huskies’ team performance between both days allowed them to jump to third place on the final leaderboard. NIU finished 29 strokes behind EKU, the tournament host and champions.

Romancew concluded play tied for 40th on the individual leaderboard at 18-over-par. EKU graduate student Ragnhildur “Ragga” Kristinsdottir took home individual honors after hitting four-under-par in three rounds.
Looking ahead
The final regular season tournament of NIU’s spring schedule is set to begin Friday as the Huskies head south to Normal to play the Redbird Spring Invitational. Competition will be held at Weibring Country Club. Live scoring of the event can be monitored here.