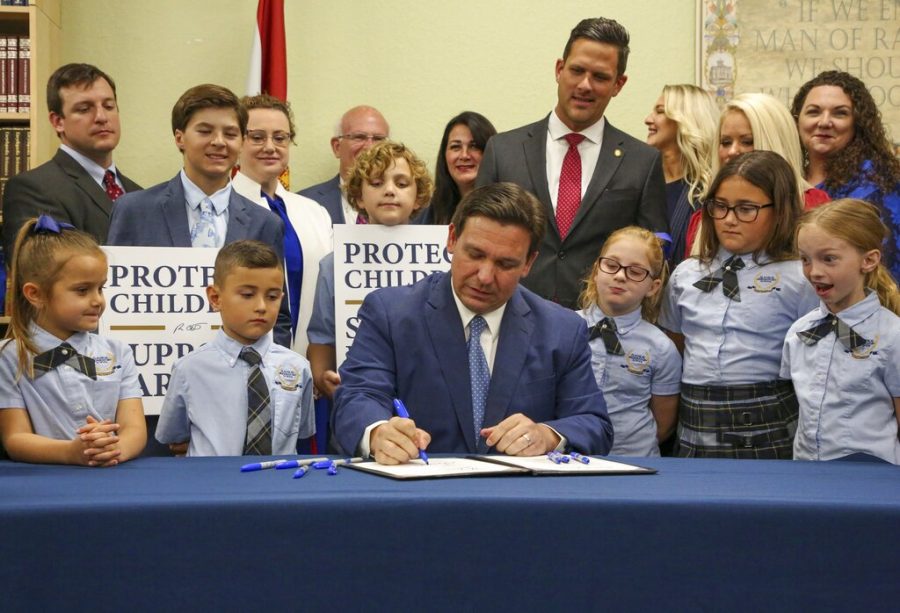 In late March, Florida governor Ron DeSantis signed the “Don’t Say Gay” bill. The bill will effectively ban teachers from holding any lessons about gender identity and sexual orientation, according to NPR.

The bill explicitly prohibits instructors from teaching kindergarten through grade three students about gender identity and sexual orientation in “a manner that is not age-appropriate or developmentally appropriate.”

Not only is this a huge step back for the LGBTQ+ community as a whole, but it could have a chilling effect on children subjected to this curriculum.

Of course, the bill claims to not want instruction or discussion on gender identity and sexual orientation that is “not age-appropriate or developmentally appropriate” which could seem reasonable, or even acceptable to some. But that’s extremely vague and subjective.

Some of her students may be in the LGBTQ+ community, too.

Not talking about LGBTQ+ families or identities is bound to isolate students, especially if they or their parents are a part of the community — the ongoing stigma already has severe effects on the mental health of LGBTQ+ women, according to the CDC and Yale.

Not only does the “Don’t Say Gay” bill target disucssion of gender identity and sexual orientation in the classroom, it also targets mental health.

In relation to monitoring a student’s mental health and physical well-being, “the procedures must reinforce the fundamental right of parents to make decisions regarding the upbringing and control of their children,” according to House Bill 1557.

Basically, parents have the final say over what their children learn about gender identity and sexual orientation.

However, if children don’t have the language or tools needed to address their gender or sexual orientation, they’re going to continue to suffer from mental health issues as they grow.

The “Don’t Say Gay” bill perpetuates the stigma that LGBTQ+ children are doing something wrong, and makes them into a taboo. It denies them the necessary support because adults would rather not talk about it.

“Prohibiting classroom discussion on these topics sends the message that identifying as LGBTQ is inherently wrong, stigmatizing and marginalizing children who may realize their difference at a young age,” said Frank C. Worrel, the president of the American Psychological Association in a press release. “Psychological research has shown that increased social isolation and stigma can lead to depression, anxiety, self-harm and even suicide.”