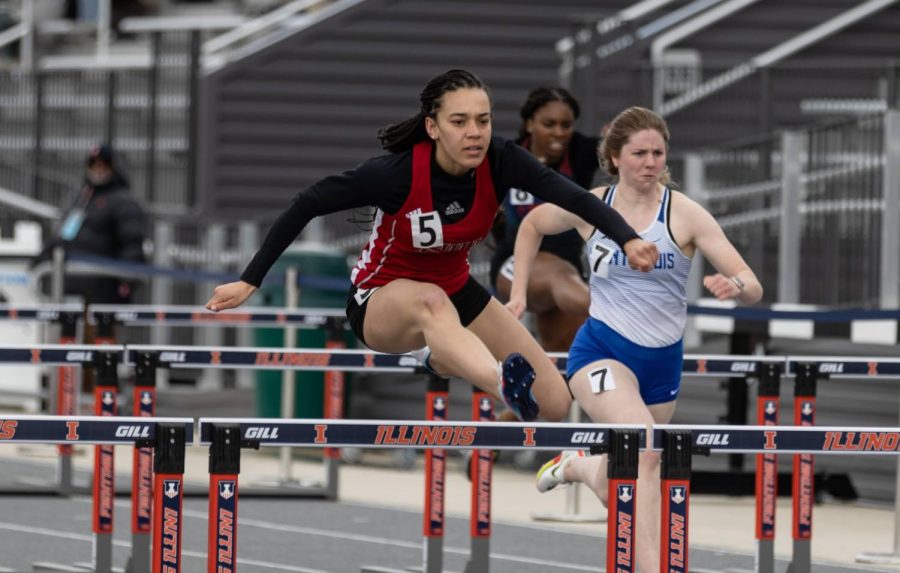 Sophomore runner Scout Regular (left) jumps over a hurdle during the 100-meter hurdles event Saturday at the Illini Classic at Demirijan Park Stadium in Urbana, Illinois. Scout recorded a time of 14.32 seconds to take first place in the event, alongside three other NIU first-place finishes.

“It was another successful competition in the books,” director of track and field Connie Teaberry said in an NIU Athletics news release. “Times for some were not blazing fast, or big jumps, yet their technique and race models get better each week. The quality work these ladies are putting in is showing positively.”
Huskies run the show in the 100-meter
Sophomore Malia Watkins’ time of 11.96 seconds in the 100-meter dash was the fastest of all competitors at the event. Sophomore Skylynn Blue finished as the event runner-up with a second-fastest time of 12.05 seconds. Sophomore Scout Regular and senior Katrina Small earned sixth and 10th place respectively to put four Huskies in the top-10 on the event leaderboard.

Regular turned in her second-straight win in the 100-meter hurdles. Regular’s time of 14.32 seconds in the event earned a first place finish. The St. Louis product’s previous time in the event at the Redbird Invite on April 2 was14.40 seconds. Sophomore Kendal Only finished 1.25 seconds behind Regular to take fifth place.

Riley improved on her overall performance with an event title of her own. Riley’s performance in the triple jump measured 11.75 meters to create a sizable advantage over runner-up Saint Louis University junior Susan D’Onofrio, whose performance totaled 11.17 meters.

NIU has now accumulated double-digit event victories with 10 titles under their collective belt after four competitions in the outdoor competition schedule. The Huskies will compete out-of-state for the remainder of their 2022 season.

Action will resume Friday when the Huskies begin competition at the Tom Jones Memorial Invite hosted by the University of Florida. The two-day outing will be held at James G. Pressly Stadium at Percy Beard Track in Gainesville, Florida.