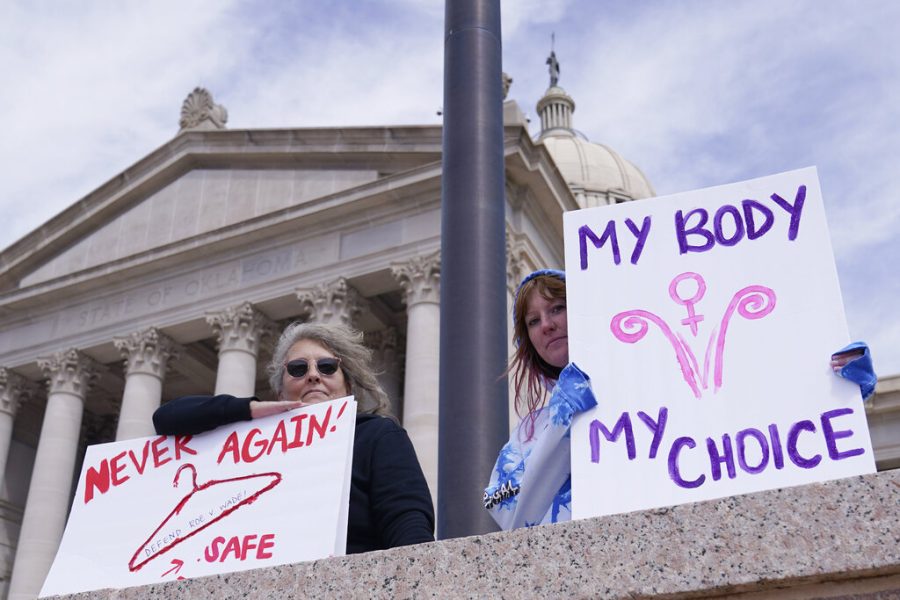 Dani Thayer, left, and Marina Lanae, right, both of Tulsa, Okla., hold pro-choice signs at the state Capitol, Wednesday, April 13, 2022, in Oklahoma City, the day after Oklahoma Gov. Kevin Stitt signed into law a bill making it a felony to perform an abortion, punishable by up to 10 years in prison.

Earlier this month, lawmakers in Oklahoma passed Senate Bill 612, a near-total abortion ban, making it illegal to perform an abortion, “except to save the life of a pregnant woman in a medical emergency,” and punishable by up to 10 years in federal-state prison and/or a fine up to $100,000.

The near-total ban is wrong and infringes on women’s reproductive rights, a choice that no man should decide for a woman.

Communications professor and faculty associate with the Center for the Study of Women, Gender, and Sexuality Dr. Kate Cady believes the ban on abortion is driven by religious beliefs from elected officials.

“I think someone who has a religious belief should get to have it, but there is a problem when someone’s religious belief that I do not hold affects me, and they say ‘you have to have the same beliefs and practices I do,’” Cady said. “Not every woman in the country has to hold the same religious beliefs as Right-to-Life groups do.”

Some of the individuals seeking to terminate a pregnancy do not have the resources to provide the quality of life that a child deserves.

“Oftentimes women are making rational economic decisions like I want to be able to provide the kind of life I want to for the child or child I already have, and I can’t afford to do that if I carry this pregnancy to term,” said Cady.

North America has a long history of abortion as was frequently practiced throughout the 1600s. However, once several bans on the act were put into place, women began seeking illegal and unsafe abortions, as explained by Planned Parenthood.

Women who feel the need for an abortion will not be stopped by a law that bans their religious or non-religious practices, they will find alternate ways to obtain what they are searching for.

This has been the case for the women of Texas who traveled to Oklahoma to access a safe abortion before Senate Bill 612 was signed. Now they will have to travel farther to states like Illinois, Minnesota, Nevada, or California.

The majority of those seeking an abortion do not have the money needed to take time off of work, travel to another state and obtain a safe abortion.

Oklahoma is merely one of several states to pass a bill further restricting women’s abortion rights, next to Texas and Florida who have increased their restrictions.

We are seeing a wave of new unconstitutional abortion restrictions in the south as they challenge the Supreme Court ruling of the 49-year-old case of Roe v. Wade.

All women should have the right to decide for themselves what is best for their health and families, whether it be carrying the pregnancy to term or receiving an abortion, and the government is obligated to allow the recourses for a clean and safe abortion to be provided for women throughout the United States.