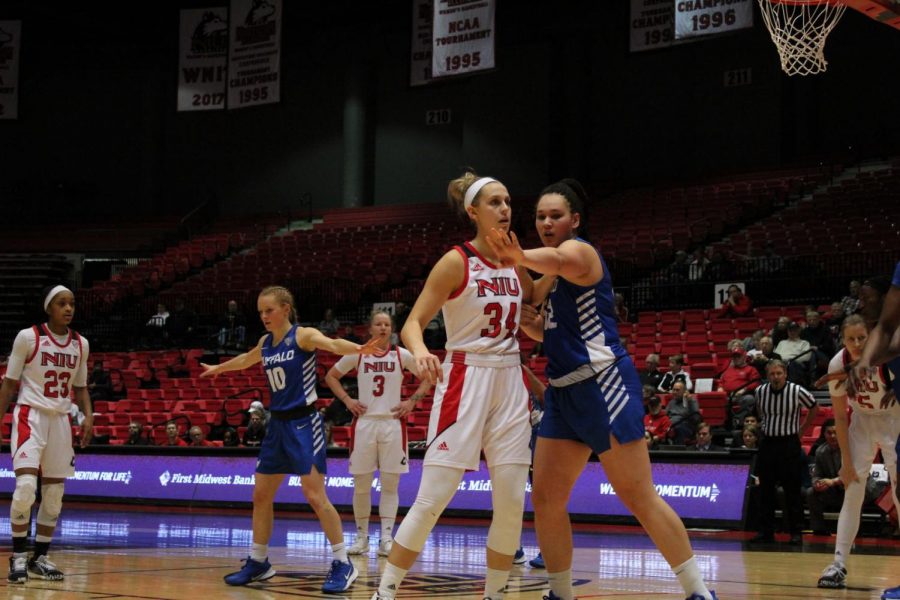 Redshirt senior Ally May (center) prepares for the ball to be inbounded from the baseline Feb. 1 during NIU’s 64-63 win over the University at Buffalo Bulls at the Convocation Center.

Buffalo had its chance to win the game, but junior guard Hanna Hall’s shot clanked off the backboard and secured the win for NIU.

NIU had a wide range of contributors in the game and was led by redshirt senior forward Courtney Woods and junior forward Gabby Nikititane with 15 points each. Sophomore forward Mikalya Brandon and first-year guard Chelby Koker each scored six points off the bench for NIU.

“I think that’s another great example of you know [someone who] obviously hasn’t had much of an opportunity this year, and [Salmi’s] somebody who continues to come to practice that understands the game plan, understands what we’re trying to do on both sides of the floor. So for her to have an opportunity just seem like the right thing to do and I thought she relished opportunity.” Head Coach Lisa Carlsen said.

Buffalo’s top performer was first-year guard Dyaisha Fair with 23 points and five rebounds. The Bulls also received contributions from first-year center Elea Gaba with 15 points and made six of her seven shot attempts.

NIU started off the game on a high note, outscoring the Bulls 10-4 through the first five minutes of the first quarter. That lead did not last long though, as Buffalo stormed back to take a 14-12 lead with 1:41 left in the first quarter.

The Bulls extended their lead to 25-17 early in the second quarter after an 8-2 scoring run capped by a 3-pointer from Fair. NIU shot poorly from the field during the quarter, only connecting on just 26.3% of its shots.

NIU had a scoring run at the end of the second quarter, outscoring Buffalo 6-0 in the final 1:31 of the quarter.

Buffalo took a 34-27 lead into halftime, led by Hall with nine points and one offensive rebound. NIU’s top performer was Koker with six points and one steal.

NIU’s momentum carried over into the third quarter, as it cut the lead down to 39-34 with a little over six minutes left in the quarter. Buffalo would extend its lead to eight on a field goal by sophomore forward Keowa Walters with 1:15 left in the quarter.

During the third quarter, Woods got tangled up with Onwuka while fighting for a jump ball. Woods left the game momentarily but came back after walking it off during an NIU timeout.

“I think I was really lucky to have my brace on,” Woods said. “I think it was her falling on it, and it was scary; that was the first scare I had since I have been back, but I’ve done all the work to get stable and strong enough. That was the first time it’s really been tested.”

NIU started off the fourth quarter red hot shooting ball, making three of its first four shots. NIU took the lead 56-55 after a 3-pointer from Brandon with 5:56 left in the quarter.

Around the five minute mark things got hectic as both teams exchanged the lead twice. Buffalo retook the lead 63-59 on after a pair of free throws by Gaba with 1:03 left in the quarter.

NIU made it a one point game at 63-62, after a 3-pointer from Nikititane with 50 seconds left on the clock. Buffalo tried to extend the lead back to three points, but the Huskies played great defense that forced Fair into missing a tough shot, and junior guard Myia Starks grabbed the rebound.

On the next possession for NIU, Starks failed to convert a layup to take the lead, but on the rebound Buffalo’s sophomore forward Adebola Adeyeye was called for traveling and gave the ball back to NIU.

After the turnover by Buffalo, NIU took back-to-back timeouts, trying to figure out the right play to get a good shot.

In NIU’s final play with time winding down, Nikititane drove toward the paint and passed it to May who turned and knocked down the shot with five seconds left.

“I just kind of read her drive; I kind of just looped around, perfect pass, two foot shot’ it was good.It was a good basketball play for sure.” May said.

The Huskies would go on to win 64-63 after Buffalo failed to retake the lead on its last shot attempt by Hall.

NIU was led by Woods in the fourth quarter with 10 points and four rebounds, while Buffalo’s top performer was Fair with 14 points.

NIU’s next game will be 6 p.m Wednesday against the Central Michigan University Chippewas in Mount Pleasant Michigan. The game will be available on ESPN+ for viewing.