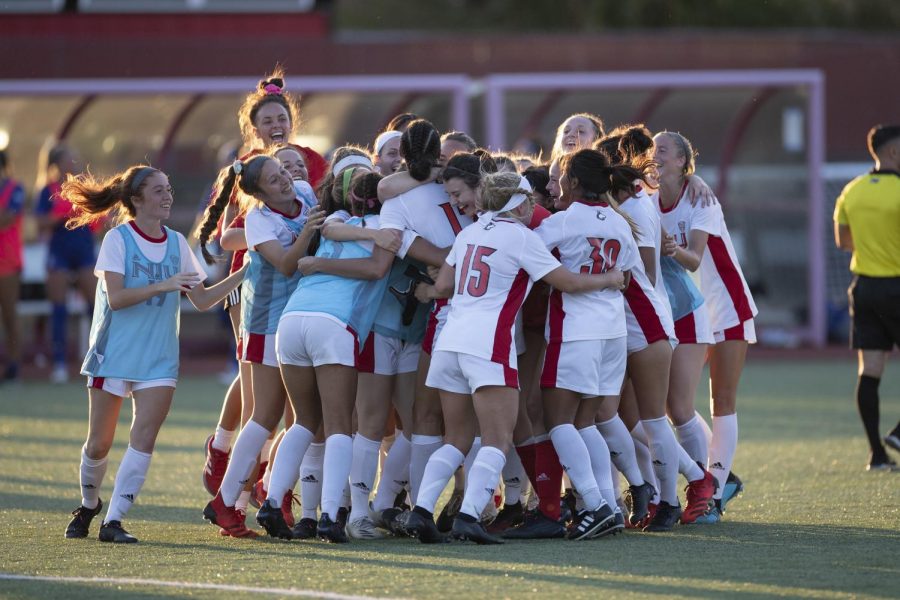 The NIU women's soccer team mobs then-graduate student forward Haley Hoppe after scoring the winning goal against Indiana State on Aug. 22, 2021, in DeKalb. Hoppe's goal in the 104th minute gave the Huskies their first victory of the 2021 season.

DeKALB — Thursday marked five years to the day since NIU’s women’s soccer team won a season opener. Head coach Michael O’Neill ended the streak that same day with a 2-1 win in his NIU coaching debut on the road against Eastern Kentucky University.

“Getting off to a winning start is fantastic,” O’Neill said. “The girls worked so hard and played for each other, which is hopefully a sign of things to come.”

The Huskies’ last season-opening victory before Thursday’s game was a 1-0 win against Western Illinois University on Aug. 18, 2017.
Saginaw Valley State comes to Northern Illinois
Two of O’Neill players from his time at Saginaw Valley State University (SVSU) followed him to NIU this offseason via the transfer portal. Those two players, junior forward Reegan Kingpavong and junior defender Lea Gruennagel, accounted for all of NIU’s scoring Thursday.

“I knew what I was getting when they asked to transfer,” O’Neill said. “It was a great way to start their Division I college career.”

Kingpavong was first to find the net and put the Huskies at an 1-0 advantage two minutes in. NIU rode the lead all the way into halftime.

The Colonels scored an equalizer in the 51st minute off the foot of senior midfielder Myla Sharpless. After 10 minutes of an even score, NIU’s Gruennagel registered the go-ahead score in the 61st minute.

Throughout the match, the Huskies were tasked with managing the physicality and technicality of the EKU squad.

“They caused us problems in many ways but we’re going to get challenged,” O’Neill said. “That’s the game of soccer and we were prepared for that.”
Many firsts for NIU
Gruennagel’s go-ahead score also counted as the first goal of her college career. Gruennagel, a native of Homburg, Germany, spent two seasons at SVSU before arriving at NIU.

NIU’s early accomplishments come in a season where O’Neill said the modus operandi is to be a team in everything they do.

“We were a team that fought for each other,” Gruennagel said. “We know now that we can win and score goals.”

Thursday’s game marked the second meeting between the Huskies and Colonels. EKU came away with a 3-1 victory over NIU in the teams’ first meeting last season on Oct. 21 in DeKalb.

The game’s result gives NIU their first win in the all-time series against the Colonels and their first win of the 2022 campaign.
Out to prove doubters wrong
Thursday’s win was also NIU’s first step toward proving its critics wrong. NIU was ranked last in the 2022 Mid-American Conference head coaches’ preseason poll that was released Wednesday. Kingpavong said NIU didn’t get the recognition it deserved from the poll’s voters.

“We were overlooked in the preseason poll,” Kingpavong said. “We have a chip on our shoulder and we just want to keep fighting.”

NIU will attempt to keep their momentum rolling as they prepare for a road matchup with the Indiana State University Sycamores at noon Sunday in Terre Haute, Indiana. The game will be broadcast on ESPN+.