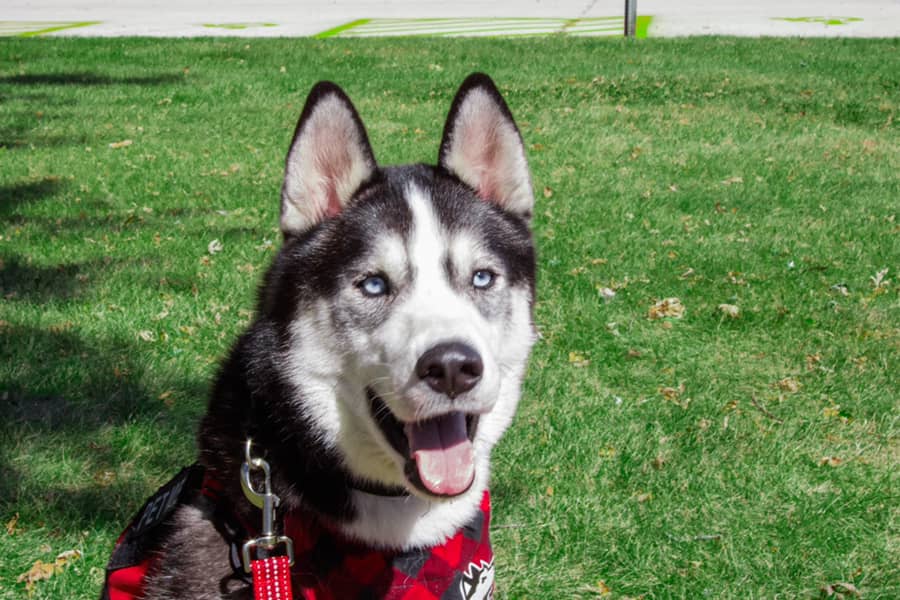 Mission II, “Mission” for short. Mini Mish. These are all the same dog. In the name of sports fans, dog fans and long-suffering media editors, please NIU: No Mission III!

Lisa Boland, trainer of Mission I and II, has confirmed that NIU has elected to move forward with the legacy mascot program, meaning that the NIU Huskie dynasty will continue the numerated “Mission” naming convention. Be that as it may, Mission II is young and healthy. I’m hoping the divine powers that be have given us enough time to change NIU’s mind and pick another name. Here are some suggestions:

Taking inspiration from NIU’s notable alumni (i.e. those with a Wikipedia page), there’s “Paul” or “Paulie Barkins,” named after the former Utah Jazz NBA player Paul Dawkins. Dawkins graduated from Northern in 1979, holding the university’s record for all-time leading scorer at 1,749 points, according to NIU. He would later be inducted into NIU’s Athletics Hall of Fame in 1991. Dawkins was a legend — rest his soul — and his name should be inherited by subsequent legends; a proposed NIU tradition, if you will.

Of course, if the next Huskie mascot identifies better with the arts, then what better name to bestow upon them than “Dan” or “Dani Canine-stellaneta” — an apt homage to Homer Simpson’s voice actor, Dan Castellaneta. A savant of art education, Castellaneta graduated from NIU in 1979. Before the The Simpsons, he was a regular personality on The Ron Petke and Castellaneta’s Dead Uncle Show radio show hosted at NIU where he honed his voice acting skills and goofy impressions. At 600+ episodes and counting, The Simpsons holds the record of the U.S.’s single longest-running animated TV show in history.

Though not a pun, may I suggest for the academically distinguished gentledog, “Tommy Bear,” named after the renowned evolutionary biologist and 2009 NIU College of Liberal Arts and Sciences Golden Anniversary Alumni Award winner, Thomas J. Near. The former Huskie graduated in 1993 with a B.A. in history and a B.S. in biological sciences. Near must’ve truly had the Huskie spirit in him because he returned to NIU for his M.S. in biological sciences, graduating again in 1995. Pledged to academia, Near earned his Ph.D. at University of Illinois in 2000 — which actually changes the mascot’s name to Dr. Tommy Bear — and now teaches ecology and evolutionary biology at Yale University.

Departing from our theme of NIU alumni, here’s my list of additional name puns: “Bark Twain,” for an exceedingly well spoken, cleverly articulate canine. “Droolius Caesar” could be a fun icon for our campus’ Greek Life community, and “Sherlock Bones” fits the description of a born detective sniffing around campus. Each nickname presents ample opportunities for dog dress-up days.

To my dismay, it doesn’t seem like NIU is folding on their decision anytime soon. On the upside, Boland shared the wholesome observation that, “Every NIU student will be able to say there was a Mission on campus with them,” which I think is pretty neat.