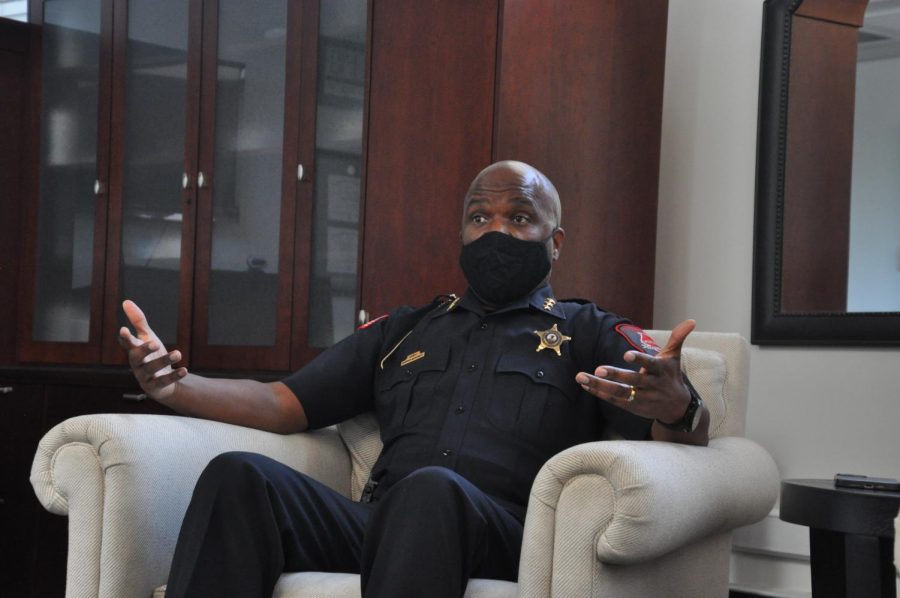 Darren Mitchell, acting NIU chief of police, recounts Sept. 11 as a patrol officer in 2001. “It was constant conversation the whole night; students didn’t even go to bed,” Mitchell said.

By Ashley Dwy and Kierra Frazier

DeKALB — NIU is teaching two generations of students about Sept. 11, 2001, as a moment in history rather than an event that occurred in the students’ lifespan. Sept. 11 was 20 years ago, which seems so far away. In reality, students, faculty and staff are still impacted by this tragedy even 20 years later.

Twenty years ago on Saturday started just like any other day. Therese Arado, acting director of the Law Library, was at home in Naperville and getting ready to go to work.

“I actually walked from my bathroom into my bedroom and saw the second plane hit the tower,” Arado said. “I didn’t know what I was seeing at the time, but I saw that it was surreal. Then, I kept getting ready for work, and I came into work that morning.”

No one understood the severity of the situation so early on and so far away from New York, Pennsylvania and Washington, D.C.

“As people were milling around at the start of the class, somebody walked in the door and said he’d heard on the radio driving in, the plane had crashed into the World Trade Center,” said David Taylor, professor at the College of Law. “I assumed, for no particular reason, that it was a small, private plane. I had remembered as a little kid that happening into the Empire State Building, so no one during the class knew the severity of it.”

I recall then everyone just kind of being in stunned silence. I think no one knew what to say or do.”

— David Taylor, professor at the College of Law

It wasn’t until students heard how tragic the situation really was on the radio that everyone stopped class to watch the news coverage unfold on TV.

“We threw our lesson plan out the window and talked about what was happening in the moment,” said Laurie Elish-Piper, dean of the College of Education. At the time, she was teaching an undergraduate course for elementary education majors.

Taylor watched the aftermath unfold on a TV that was wheeled into the Marshall Gallery in the Law School.

“I recall then everyone just kind of being in stunned silence,” Taylor said. “I think no one knew what to say or do. I recall I was sitting next to a colleague of mine who had college-aged children. She sat there for a while and then all of a sudden got this real startled look on her face and said, ‘I got to go call my kids.’ I was worried, and I said, ‘Do you have kids in New York?’ And she said, ‘No, but I just have to speak to my kids.’ That was an interesting thing that went on. I think a lot of us had people that you knew from your past… and people just wanted to hear your voice and know that everyone was okay.”

Darren Mitchell, acting NIU chief of police, didn’t get any sleep the day of the Sept. 11 attack. Mitchell, who had only been a patrol officer for nearly two years at the time, said the police department created a presence on campus to help ease the anxiety of students and were confronted with questions such as “What does this mean” and “Are we going to war?”

“It was constant conversation the whole night; students didn’t even go to bed,” Mitchell said. “They were up, they were out on the stoops, they were talking, they were engaged with each other. When I got off work the next morning at 7 a.m., students were still just hanging out.”

Elish-Piper said the silence lasted until the next day, no matter where people went or what they did. The silence came from people processing what had occurred on that day.

After the attack, everyone at NIU — and the rest of the nation — was worried about each other. In general, it was a day where people spent time reaching out to friends and family, Arado said.

“Especially after that day and that week, it was checking in with people, not just walking down the hall, ‘Hi, how are you?’ It was, ‘Hi, how are you really doing?’ It was following up with students to make sure I’m giving them the opportunity to talk about their emotions at the beginning of class because you couldn’t just pretend that our world hadn’t really changed drastically at that point,” Arado said.

Students especially wanted to check in on their Muslim friends, Taylor said.

“I also remember students and everyone were really concerned about their Muslim friends and if there would be retribution by Americans against American Muslims who had nothing to do with this,” Taylor said. “I think it was very nice; people rallied around and supporting our Muslim friends to make sure that harm would not come to them.”

This explanation of the attack and why it’s significant is still happening today and will continue to happen for the rest of America’s history.

“I have a 7-year-old and last year was the first time she had asked about (9/11),” said Emily Cronauer, academic adviser for the College of Business. “She saw reports on TV and wanted to know what happened. It’s important to talk about, and she understands that; it’s so hard at the same time because it still makes me so emotional.”